Did an NBA Referee Fix Games? 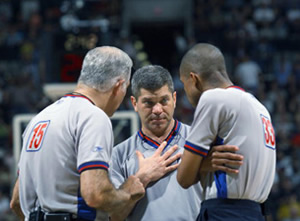 –Shocking story in the NY Post this morning: The FBI is investigating an NBA ref who allegedly fixed games and had ties to the mob.

The investigation, which began more than a year ago, is zeroing in on blockbuster allegations that the referee was making calls that affected the point spread to guarantee that he – and the hoods who had their hooks in him – cashed in on large bets.

Federal agents are set to arrest the referee and a cadre of mobsters and their associates who lined their pockets, sources said.

The sources indicated the referee apparently had a gambling problem, slipped into debt and fell prey to mob thugs.

(Something tells me David Stern isn’t enjoying his breakfast this morning.)

-Mike Wilbon on the infinitesimal possibility that Sir Charles leaves TNT for ESPN.

I can’t get fined for tampering, so yeah, I’d love to see Chuck with us. But if I was Turner, would I let Charles leave? Hell, no. No. No. That would be insane.

-I don’t know why, but I get the feeling that Frank Isola isn’t a big fan of Steve Francis.

-Starting next season, the Suns will be the first NBA team to broadcast all of their games in HD.