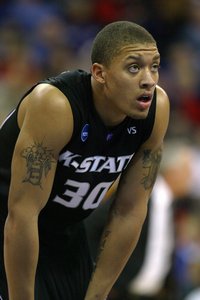 It’s no secret that the business of college athletics is dirtier than a Jenna Jameson tape, with everyone – from the schools, coaches, runners, and all kinds of leeches – out to milk the players for all they’re worth.

The latest story involves Dalonte Hill, Michael Beasley’s former AAU coach and the man who delivered the stud forward to Kansas State. For his troubles, Hill’s bank account is looking mighty healthy these days (especially for an assistant coach at the collegiate level). From Rivals.com:

Hill will make more money for the 2008-09 season than the entire three-man staffs at Ohio State, Washington State and Wisconsin.

Nothing comes free in this world, especially not in the world of big-time college hoops.

In other Beasley news, there’s chatter in Miami that the second overall pick may begin the season on the bench.

(Link swiped from The Oregonian.)