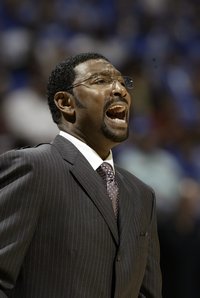 Strange, hilarious stuff out of Toronto: Rumor has it that the day before they were eliminated by Orlando, Sam Mitchell made the team fly out of Canada at 8 in the morning so that he could hit the links in sunny Florida. The Globe and Mail has the details:

We’re going to go out on a limb here: There’s a very real chance that Mitchell played golf on a sunny Sunday afternoon in Orlando, and there’s distinct possibility that Darrick Martin was with him. And might Colangelo have been less than thrilled at the optics, if not the fact of said golf game? Again, just speculating, but yes.

And were some players less than thrilled at having to get up early on Sunday morning – remember, NBA players work nights – for an 8 a.m. flight instead of practicing at the Air Canada Centre and flying out that afternoon, as had been originally scheduled? That’s a safe bet. Like the rest of the general population, NBA players prefer to sleep in.

Mitchell, of course, denies taking the earlier flight so as not to miss his tee time. And if there’s any truth to this, what’s with Toronto basketball personalities having other arrangements before huge Playoff games?

Whatever the case, Mitchell and the rest of the organization now have plenty of time for golf and other leisurely activities.