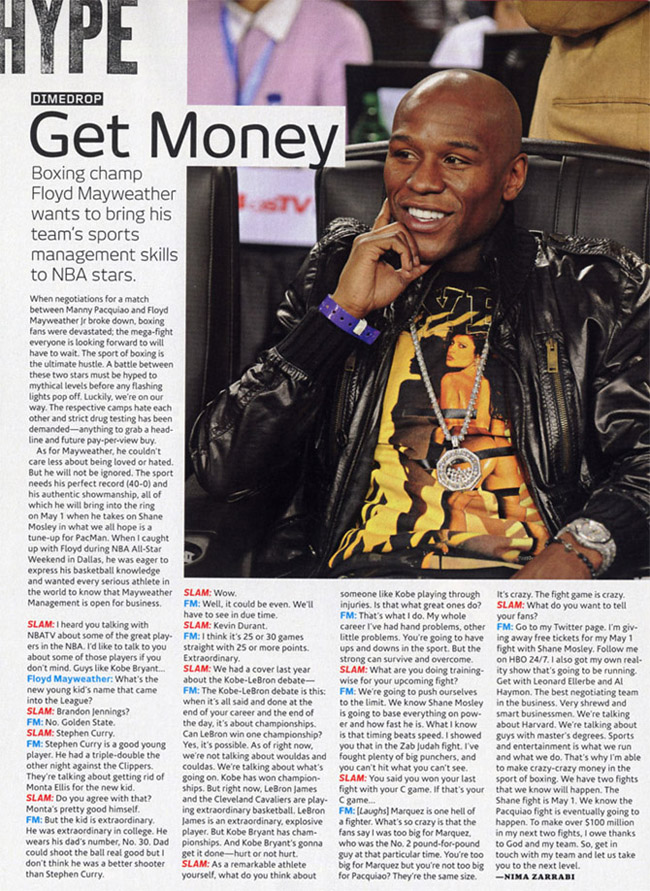 He couldn’t stress that point enough when we met up during NBA all-star weekend in Dallas, for a one-on-one interview. Money Mayweather claimed he had the best business team in all of sports, glowing about a plan to cash in on $100 million in his next two fights—a future showdown with Manny Pacquiao and Saturday’s tilt against Sugar Shane Mosley at the MGM Grand in Las Vegas.

Floyd is rumored to be banking $40 million for his fight against Mosley and he doesn’t plan on sharing any of that scrilla with a promoter, according to his manager Leonard Ellerbe. “Floyd keeps all of his money and Mosley gives 27 percent of his money to his promoter (Goldenboy),” Ellerbe told The USA Today. “What Floyd has done—and I think other fighters will appreciate it down the road—he’s been the first fighter to establish a business model that puts him in a position to control all of his revenue.”

In addition to his shrewd business acumen, Mayweather has also been promoting his “Pretty Boy Floyd” persona on VH1 of late, as a potential love interest of TLC singer Chilli in a reality show. It’s been great to see that side of Floyd. He’s much more laid back when he’s not trying to silence all of the haters through the media. (His family life was also explored in the NY Times this past Sunday, giving us a rare glimpse into Floyd’s inner circle.)

On Saturday, the 33-year-old Mayweather will put up his perfect 40-0 record against the 38-year-old Mosley (46-5) and boxing pundits are expecting a good fight, although they surely would have loved to have it many years ago.

WHO R U PICKING? I think Floyd will be prepared for Shane’s aggressive style and he will prevail. I expect 12 rounds and Floyd to win decisively. Mayweather touched on Shane’s strategy during our interview, published in the current issue of SLAM, #138. I enjoyed our discussion about the NBA—Floyd knows the League extremely well, betting obscene amounts of money on games throughout the NBA season. It’s safe to say that he’s obsessed with NBA statistics and injury reports.

In case you missed our Dime Drop Q and A with Mayweather that’s in SLAM 138, we’re publishing it again here for our online readers to peep.

Enjoy the read, and enjoy the fight!