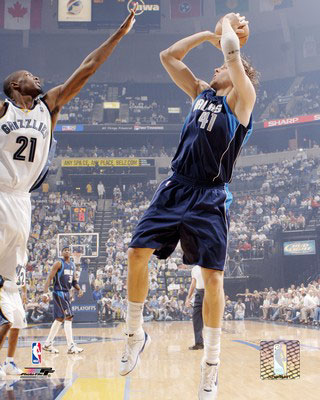 Dirk Nowitzki, winner of the 2006-2007 regular season MVP, not to put too fine point on it, crapped the bed in the Playoffs. Time and again, he had that deer-in-the-headlights look on his face as the Warriors completed an historic upset over his heavily favored Mavs.

Nellie and his crazy band of basketball gypsies completely took him out of the series, and for the most part, he hung out on the perimeter not doing much of anything.

Going into this season, Dirk has added a new tool to his arsenal of moves, one designed to help him take advantage of his touch and size: A post game.

“It’s to the point now that I’m more comfortable down there,” Nowitzki said. “When Avery first put me down there, it was pretty awkward. But it’s getting better.”

“He was good that night with his back to the basket,” said Johnson, who joked that it was the new weight training that had Nowitzki going stronger to the rim.

Now, if Nowitzki could just get that not-being-intimidated and becoming-a-leader thing down pat, then the Mavs would be right back in this thing.