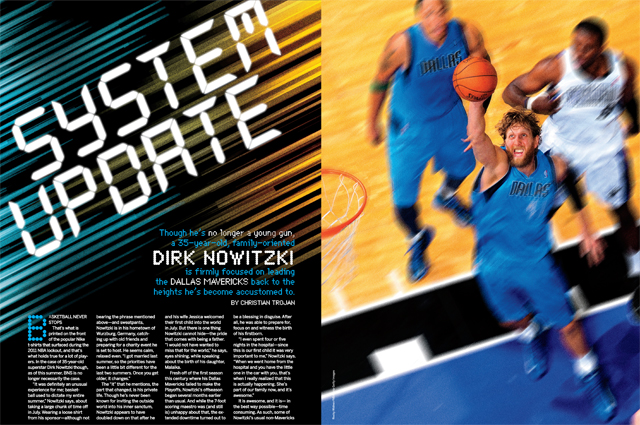 That’s what is printed on the front of the popular Nike t-shirts that surfaced during the 2011 NBA lockout, and that’s what holds true for a lot of players. In the case of 35-year-old superstar Dirk Nowitzki though, as of this summer, BNS is no longer necessarily the case.

“It was definitely an unusual experience for me; basketball used to dictate my entire summer,” Nowitzki says, about taking a large chunk of time off in July. Wearing a loose shirt from his sponsor—although not bearing the phrase mentioned above—and sweatpants, Nowitzki is in his hometown of Wurzburg, Germany, catching up with old friends and preparing for a charity event he is set to host. He seems calm, relaxed even. “I got married last summer, so the priorities have been a little bit different for the last two summers. Once you get older, it changes.”

The “it” that he mentions, the part that changed, is his private life. Though he’s never been known for inviting the outside world into his inner sanctum, Nowitzki appears to have doubled down on that after he and his wife Jessica welcomed their first child into the world in July. But there is one thing Nowitzki cannot hide—the pride that comes with being a father. “I would not have wanted to miss that for the world,” he says, eyes shining, while speaking about the birth of his daughter, Malaika.

Fresh off of the first season this century where his Dallas Mavericks failed to make the Playoffs, Nowitzki’s offseason began several months earlier than usual. And while the 7-foot scoring maestro was (and still is) unhappy about that, the extended downtime turned out to be a blessing in disguise. After all, he was able to prepare for, focus on and witness the birth of his firstborn.

“I even spent four or five nights in the hospital—since this is our first child it was very important to me,” Nowitzki says. “When we went home from the hospital and you have the little one in the car with you, that’s when I really realized that this is actually happening. She’s part of our family now, and it’s awesome.”

It is awesome, and it is— in the best way possible—time consuming. As such, some of Nowitzki’s usual non-Mavericks activities have taken a backseat. On a public tip, the German national team had to fend without their star in the EuroBasket championship, which took place in Slovenia in September. And on a private note, Nowitzki was only able to spend a paltry two weeks at home in Wurzburg.

“We don’t have anyone from the family nearby,” says Nowitzki. “No grandma, no grandpa, no nothing.” Everyone is a 10-hour plane ride away—too much for little Malaika at that early age. That’s why Nowitzki cut his normal trip way short.

Aside from not getting to chill in his birthplace, a shortened stay in Germany also meant that Nowitzki and his basketball mentor, Holger Geschwindner, didn’t get as much face—and gym—time as usual. That’s OK, though. The two of them got plenty done, even if it didn’t include some of the more eccentric exercises that Geschwindner, a 68-year-old who’s been working with his star protégé for 20 years, is now famous for.

“No, no. We don’t do the handstand walk and some of the other stuff anymore,” Nowitzki says through a smile. “The program has changed over the years: a little more shooting, a little more running. When I was in my physical prime, maybe at 25, we did two and a half hours of that stuff, but not anymore.”

No, no. Not that stuff. Instead, after being plagued for much of last season with a lingering knee injury, and after missing the Playoffs, a disappointed Nowitzki began preparing for the upcoming NBA campaign almost as soon as his season ended.

In May and June, Nowitzki focused on his conditioning and leg strength. In July, he took time off, as he said before, to be with his family. And since August, he’s been working on basketball-related activities. As far as the 15-year vet is concerned, he’s more than good to go. “I’m feeling very well,” says Nowitzki. “The knees are holding up. I feel much better than I did last season.”

The work, however, isn’t done. Aside from contiuning his regular workouts back in Dallas, Nowitzki plans on bringing Geschwindner back out for a final fine-tuning before the ’13-14 season. “At the very least he’ll be in Dallas for the last week of October,” says Nowitzki. “I believe our first game is on October 31. We usually work out the last week before the season.”

Ah, the new season. When he talks about it, Nowitzki can’t help but get excited. It’s his chance to prove to himself and to everyone else that last season was an aberration. “I’m ready to go,” he says. “I’m really looking forward to training camp right now.” Asked whether that means that he is running around like in the “What day is it?” commercial the Mavs are using to push tickets, Nowitzki laughs and backpedals some. “No, it’s not quite that bad. But I’m looking forward to playing with the guys again.”

A wife. A kid. A life. It’s easy to get confused and think that Nowitzki doesn’t care as much as he once did about winning, losing and the Mavericks. That’s far from the truth, though. In fact, with the clock ticking on his career and only one Larry O’Brien trophy sitting on his mantle, Nowitzki cares more than ever. “The competitive drive is still there,” says the 2011 Finals MVP,” and I think if it was any different I would quit. I want to play at the highest level and I want to win. That’s why last season was so disappointing for me, especially missing the Playoffs.”

That’s also why Nowitzki was hoping the Mavericks would pick up a few helping—if not leading—hands this summer. And while the results weren’t quite disappointing in nature to the star, they were not what he was looking for.

Says Nowitzki: “We did have some hopes of landing Chris Paul but it became obvious very quickly that he would re-sign with the Clippers. We then prepared for our meeting with Dwight Howard, which I was a part of. Despite the injury last season, he’s still the best center in the League in my book. So we flew down to L.A. and presented our plans. I think Mark Cuban did an unbelievable job with the video, the slide show, the PowerPoint and everything else that we had lined up. I thought we made a very good pitch [laughs]. But then again, all four or five teams probably felt that way.”

At this point in his breakdown of the free-agency period, Nowitzki slows down ever so slightly, lowering his voice. He does not try to hide how he felt and still feels. “That was truly a frustrating moment once again,” he says, of Howard’s decision to sign with the Houston Rockets, “but I think we have nothing to regret and still made the best of the situation. We did not want to go the same route of eight or nine guys on one-year deals, which clearly failed last season. We might have even made the Playoffs with that team if I hadn’t missed 29 games.

“We clearly choose to go a different route this year,” Nowitzki continues. “We did have our problems last year with turnovers and guard play, especially at the end of games which is why we have invested in [Jose] Calderon. Then we got Monta Ellis, which came out of nowhere basically. I didn’t even know we were still in the running for him at that point. But all of a sudden Cuban texted me, ‘We’re getting Monta Ellis,’ and I was ecstatic. He’s a very quick and explosive player. I don’t think I have ever played with a player of that caliber at the 2-guard position.”

It’s evident that Nowitzki is genuinely excited about his new cast of teammates. He’s excited about, as he points out, Ellis’ ability to get to the basket; about Calderon’s 46 percent three-point shooting, a number he drops off the top of his head; about the addition of Samuel Dalembert.

“With Calderon, Ellis and also myself on the floor, we need Samuel Dalembert to have our backs defensively, be active and play very good pick-and-roll defense,” says Nowitzki. “We might have to play some zone here and there, which I think we have done well in the past. We just have to be smart and adjust our defensive schemes. You can’t just go out, score 120 points and expect to win any Playoff games that way. Those times are over.”

While it might be a reconstructed team that he hasn’t had the chance to play with yet, and while it might be a new season coming off the back of a Playoff-less one, Nowitzki’s view of the Mavericks and the Western Conference as a whole is precise and concise.

“I do think we have the pieces to get to the Playoffs and then we’ll take it from there,” he says. “With [Russell] Westbrook coming back, I think that OKC is still the favorite in the West. But after that I think there are some question marks. Many teams got better in the offseason and I think we did as well. The Clippers’ bench got deeper, and I think Blake [Griffin] will be better this year. Golden State can now play even faster with [Andre] Iguodala, can run smaller lineups even. Houston certainly wants to contend for playing at home in the first round. It is going to be another interesting season.”

With that, Nowitzki stops speaking. His schedule for the rest of his short stay in Germany is crowded to say the least. After just a few dinners at his mom’s table, a few training sessions with Geschwindner and one charity event later, he will already be on a plane back to Dallas, to be with his newly founded family and to continue his preparations for the ’13-14 NBA season. Because at the end of the day, basketball actually does not stop. It might take a break for a bit. But for Dirk Nowitzki, it never really stops. 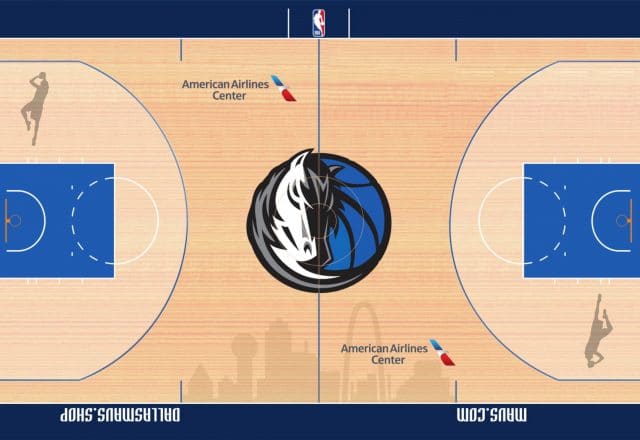