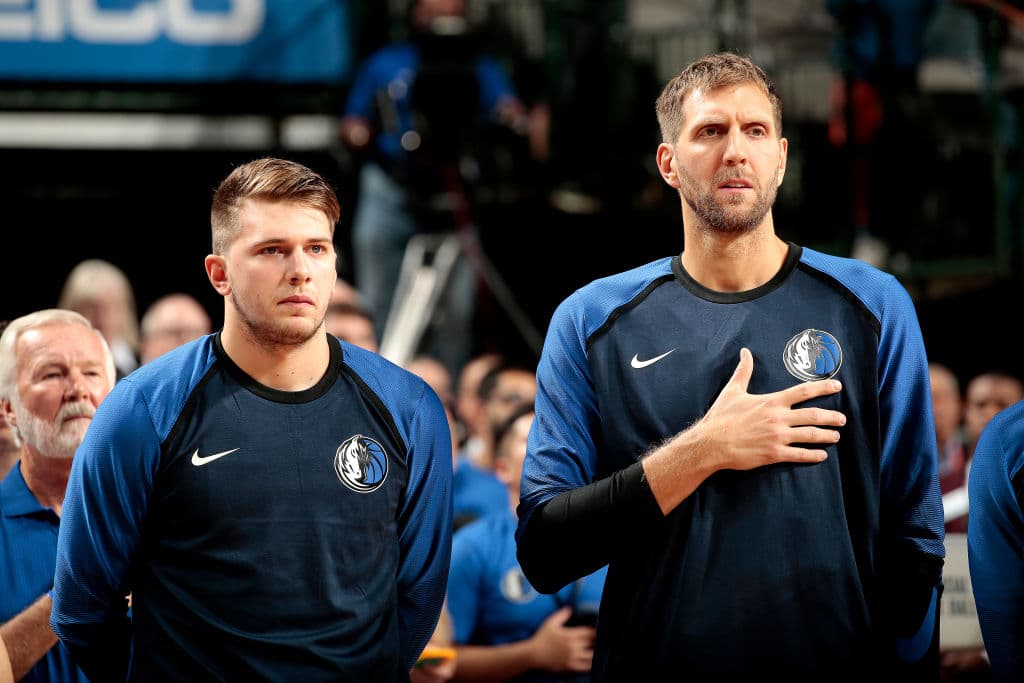 Dirk Nowitzki (@swish41) dishes on @luka7doncic with a detailed scouting report, his "battle" with LeBron on the all-time scoring list and his hopes for returning "in a few weeks." Via the (Digital version of the) @nytimes' weekly NBA newsletter –> https://t.co/FuTesz3gI8

Nowitzki, 40, has yet to suit up in his 21st season debut due to an an inflamed left foot tendon.

Dirk: “He’s like a savvy veteran to me already. The way he sees things. The way he reads pick-and-roll situations. The way he carries himself on and off the floor. He’s got the midrange game. He shot like four floaters against San Antonio that were money. He’s got the stepback 3. He’s got stuff in his repertoire that you just don’t have at 19.

“The whole floor game that he has — he really has no holes. If you go under the screen and roll, he shoots the 3 -ball way better than I thought he would. If you go over, he kind of keeps you on his back. He’s got the floater. He’s got the passes. Really, really impressive for a 19-year-old. The sky’s the limit.”

Even though you’re both from Europe and both came to the N.B.A. at a young age, Luka has the ball in his hands all the time and you have always been a finisher. So doesn’t that make it harder to mentor him when you play such different games?

Dirk: “Dirk: He’s a very confident player already. He was a full-on pro since he was, I don’t know, 14 years old. He lived in a different country before he even came here. His English is good. He feels like, in his head, he’s running the show already. He carries himself like a true vet. So we have a great time. He’s a good kid. But so far he doesn’t really ask me much. He just plays his game.

“Also the way the game is now is kind of perfect for him. When I got into the league 20 years ago, it was way more physical. The bigs were just shoving in there and holding. And now everything is a foul call. So I think the rules play right into his wheelhouse. It’s not even close to compare us.”