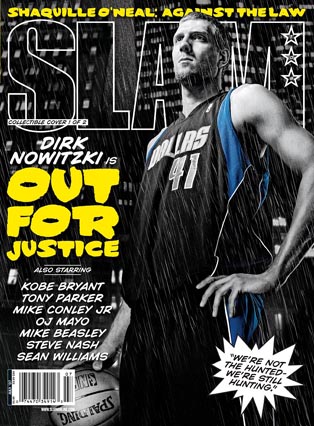 Late last Thursday night (technically Friday morning), the last words I heard before I turned the TV off and smashed my head on the pillow came from Marv Albert: “THE GOL-DEN STATE WAR-RI-ORS have pulled off the biggest upset in NBA Playoff history!” One thought crossed my mind before I conked out: The mag—a gift and a curse—will be there in a few short hours at the newsstand, mocking me. It has to be. That’s the only way fate would have it.

As I hopped off 6 Train on my way to work, a mere six hours after I’d gone to bed, I quickly beelined for the newsstand. Just as I had thought, there fate was, ridiculing us, while looking dope as F—. When I saw the quote that had been pulled for the cover (“We’re not the hunted. We’re still hunting.”) I laughed out loud, and then some of the leftover sleep in one of my eyes became a tear, though I don’t think this happened on purpose. So yes, Ben, technically I laughed and I cried.

Late March: Dirk and I are sitting courtside at the Thriller Dome on the Georgia Tech campus. I had been on the phone earlier that morning with Lang, brainstorming about stuff to ask the guy I’d give my MVP vote to. We talked about how all the Mavs did was win and how nobody nationally seemed to care about them. If you’re talking good vs. evil, they seemed like the unstoppable bad guys that could only be taken down by more popular heroes. We thought the potential for evil would be a good thing to try and get at. (After all, I was told that SLAM’s creative braintrust had decided to run with the Sin City theme, so it’d probably work well with the story if Dirk revealed a darker, badassier side.)

So I asked Dirk if he ever felt like the villain out there on the court. He shot me this incredulous look. “What? Me?!?! I’m not a bad guy!” he exclaimed, sounding surprised and even a little offended that I’d even go there. I was momentarily stunned and a little shaken by how adamant he was that he was a nice guy.

More importantly, his answer revealed something about him that I hadn’t known prior: Dirk Nowitzki is a genuinely gentle-hearted giant. He followed up the confirmation of his nice guy status with this: “If you wanna be successful on the court, you have to be tough minded and sometimes selfish and [use] all the attitudes you don’t really want in life outside of basketball.” That has to resonate with everyone who saw how passive Dirk was against Golden State. It’s also especially interesting when you consider that cold-blooded assassins like MJ and Kobe have trouble separating their uber-competitive on court personas from their off the court lives.

Yet, despite the apparent kindness, I decided to write a story that went against the blossoming national perception at the time that Dirk—and more importantly, the Mavs—were soft. Why?

1) They had an amazing regular season. It didn’t end up as incredible as it could have, but it was heading that direction when I sent the story in. A 61-7 run. That was and still is utterly mind-boggling. Anyway, as I watched them methodically destroy teams night in night out, I happily glugged the kool-aid. Hell, I was punch-drunk on the stuff; it all seemed ever so clear.

2) I’m a nice guy. Partly because of this, I don’t ascribe to a “Nice guys always finish last” attitude even if, often, they do. Seeing Dirk as a nice dude with some nice dreams, I only wanted to see the guy succeed. And if he made us look good in the process, cool.

This is the part of my cover story explanation where I talk about Left Field. Left Field, or coming from there, is something that I do with decent frequency. Just know that when you flip to page 110 of the new SLAM, the analogy I used was an organic idea that randomly occurred to me one afternoon at my day job. I didn’t try to stir the pot on purpose. And I promise: I will not come up with ridiculous analogies having to do with bodily functions in every cover I write. I’m not trying to start a new trend, though I’ll admit the weirdness that was originally a concern might actually give a story buried in irony its legs.

While it’s definitely ironic that neither Dirk nor Shaq are still in the playoffs, I think this story takes irony to new levels. When you read it, just pretend that parts of the story are trying to be ironic. It will be much funnier that way. Really, given what transpired in the first round, some of the quotes are downright uncanny.

The most ironic reality about much of the criticism Dirk is currently receiving is that it goes directly against two of the most important things I learned about him by doing this story. 1) He’s a gym rat. More than you’d know or assume. 2) He really does cares about winning. While certain aspects of his performance against Gully State would indicate otherwise, it doesn’t mean he doesn’t work really hard on his game and it doesn’t mean he doesn’t care about winning. There’s an interesting mental piece in there that holds the key as to why Dirk went out so quietly against the Warriors, but I don’t think I understand what happened and why it happened, either. If I could just pan it off as a lack of heart, I’d say so, but it’s much more complicated than that. I do, however, know that the Mavs’ failure this year has nothing to do with Dirk’s lack of interest in winning or a lacking work ethic.

Extra stuff that didn’t make the story, mainly quotes, some of them more ironic than others:

Around the time of the interview there was a lot of talk about Mark Cuban (much of it from Cuban) wanting to sell the Mavs this past summer. I asked Dirk about that.

SLAM: I heard Cuban was going to sell the team, but then you guys hung out and he changed his mind. Did you know about that?

Dirk: No. We went to Vegas for a little bit. Had fun.

SLAM: So Vegas cures everything.

Dirk: Yeah. I didn’t even know he wanted to sell the team. I don’t even know if there’ s any truth to that. If that’s what he said…

SLAM: Do you feel more Americanized after so much time in the league?

Dirk: I don’t really see myself as any of that. Obviously, I’m from Europe and I represent Germany internationally every summer and that’s fun, but to me, once I’m on the court I’m not worried if I’m Americanized, if I’m European at all—that doesn’t matter—I’m trying to help my team win, and some nights that means get ten rebounds and some nights that means score 40 points. I wanna do whatever it takes with my all-around game to help my team win. Really, that’s all I worry about. All that representing somebody, or thinking about where I’m from; to me once we’re on the court as a team, we’re all the same. Doesn’t matter if you’re white, black, Chinese…

(We had been talking about his personality in the locker room…)

SLAM: Do you curse at your teammates in German to mess with them?

Dirk: (after I asked him about their loss to the Suns in what many consider to be the game of the year) : We can’t really worry about what critics think. No team in this league is perfect, and no team is going to go 82-0. There will be some tough losses in a long season and Phoenix was, obviously, a tough loss for us. We have to learn from those losses. We were up seven with a minute to go. We have to learn to win those games. We’ve proven that we can win those games. We didn’t get to The Finals last year by luck. We won a lot of close games. We won a game 7 situation in overtime in San Antonio where we closed out the game, so I think we’ve proven that we can close big games out. It’s just that one game we let it slide away.

Quotes from a conversation with Austin Croshere:

“One of the great things about what Dirk does is how prepared he is before the shots. He does all his work early. He has a great release point on his shot. You combine that with his height and his shot is virtually impossible to block. He does a great job in taking long strides. Again, combining his height with taking really long strides, he’s able to get by guys that are a lot smaller than him.”

“When they switch and put smaller guys on him, he’s able to now shoot over them, but by using that long stride he’s able to get by guys that are quicker than him.”

“My impression of Dirk over the past couple of years has been a guy that, I don’t want to say primarily is a three point shooter, but certainly a guy that took a lot more threes than he has this year. I wouldn’t be surprised at all to see that his three pointers are down this year and his free throw attempts are up because he’s getting to the basket more.”

SLAM: Talk about how he opens up the rest of the floor

Harris: You get a guy that they pay so much attention to, a guy that can shoot the ball and space the floor the way that he does, he opens up things in the pick and roll; he does a lot of things just by being on the court.

SLAM: What’s his biggest improvement in your eyes?

Harris: His leadership has gotten better this year. He’s always been a guy we can go to late in the game, but I think off the court, giving guys confidence and doing the little things, he’s been better.”

SLAM: Do you guys still feel like you’re regrouping from last year?

Harris: Obviously, it put a little chip on our shoulder. We don’t wanna have that feeling again. It’s motivating us to be a better team. We really just feel like we haven’t arrived yet. Obviously, we don’t play as well as we want to every night, but we’re still winning games.

SLAM: What’s Dirk’s ceiling? Has he reached it? Does he have one?

Harris: I don’t know if there is one. He does so many things. Next thing you know, he’s going to be running the point guard.

SLAM: Do you think he gets lost in the mix compared to the hype that other guys get?

Harris: That’s something he doesn’t really focus on. He just comes out and doesn’t get caught up in the hype. He goes out and does his work, and does it at a high level, each and every night. He lets his game speak for himself.

SLAM: Kind of like the new age Tim Duncan.

“His overall game, his feel for the game is continuing to improve. It’s been better each year on, and this year, more specifically, I think that his passing to the right the person at the right time and his mixing up of his post up game have been the two things that he’s made the most improvement in. But, overall, as good as he’s been—as a 6 time all-nba player, two years third team, two years second team, the last two years first team—he is even better this year.”