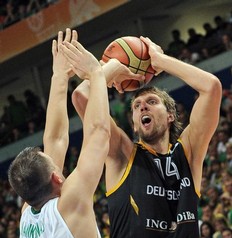 After winning an NBA title, most players spend the following few months soaking it in, celebrating and partying and traveling and whatnot. No doubt, Dirk Nowitzki did all of that, but the big man also decided to suit up for Team Germany in this month’s Eurobasket, hoping to help his country earn a spot in the next Olympics. Unfortunately, that won’t be the case.

Nowitzki’s team fell 84-75 to Lithuania on Sunday, a loss that eliminated Germany from the qualifying tournament and will also leave them without a spot in the 2012 Winter Games.

Here are some details, via ESPN:

Dirk Nowitzki hugged his teammates, embraced his opponents and accepted the applause of the fans who have celebrated every step of his long and devoted stint with his team.

But unlike in June, he walked off the court with his head bowed and his dreams broken. Germany, requiring victory by 11 points or more, was eliminated from EuroBasket with an 84-75 defeat to Lithuania on Sunday as the tournament hosts progressed into the quarterfinals.

In front of 11,000 screaming, partisan supporters, a Lithuania loss would have brought devastation for an entire nation. For Nowitzki, the end of his hopes of playing in another Olympic Games, this time in London, was no less painful.

He had 16 points and 11 rebounds but could not provide the kind of heroics that helped carry the Dallas Mavericks to the NBA title three months ago. By the end, quite simply, he had nothing left to give.

“Overall, I don’t feel I was in the kind of shape I needed to be in here,” he acknowledged. “I don’t feel I really played a good tournament for us. I missed a lot of shots. Even today, in the fourth quarter, it was a tight game and I had two or three looks that I have got to make.”

Held scoreless in the first quarter, Nowitzki urged his compatriots onward as they took their only lead with a 6-0 run in the third quarter. Ahead 41-39, that was as good as it got.

Clipper center Chris Kaman added 25 points for the Germans, but Lithuania, led by Raptors draftee Jonas Valanciunas, was too much. Gotta applaud Nowitzki for giving it his best shot, though—surely there were more relaxing options on the table for the reigning NBA Finals MVP, but he chose to represent his country. Respect.