Dirk Nowitzki’s the MVP and You’re Not. 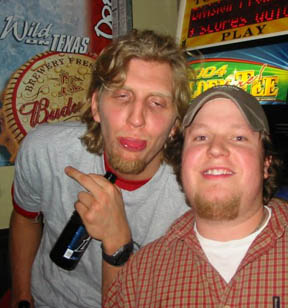 ESPN’s Marc Stein, the only NBA blogger who sleeps less than I do (or at least stays up almost as late) is reporting that Dirk Nowitzki will be named the 2007 NBA MVP sometime next week. Apparently the award presentation will occur in Dallas—might I suggest a specific location?

All (or at least some) jokes aside, it’s easy to forget just how good Nowitzki’s regular season was when seen through his shocking meltdown against the Golden State Warriors. (The 67-15 Mavericks were—by far—the team with the best regular-season record to ever lose in the first round.) But it’s important to remember what Dirk did in those 82 games, because those are the ones that mattered to the voters. Ballots were turned in before the start of the first round.

People are still gonna doubt, of course (or “hate,” as the kids like to say these days). They’re gonna say Dirk didn’t play defense, or cite (no matter how many times you point out that the votes were all in before the series even started) his playoff flameout as a sign that he just doesn’t have that extra something when it really matters. They’re going to push for Kobe, who had that string of 50-plus point games and undoubtedly carried the Lakers, or LeBron, who while “coasting” still managed to average 26, 7 and 6 and lead the Cavs to 50 wins, or even Steve Nash, despite the fact that a third straight MVP award would place him in company that most feel is somehow sacrilegious (a feeling that I, for one, don’t share.

But the award is Dirk’s, and I think that’s OK. Because the MVP has always been about two things—individual excellence paired with team success. And, to paraphrase Michael Jordan, “anyone else win 67 games”? At the time the votes were tallied, was it that unrealistic to think that the Mavericks would still be playing deep into June?

For those who continue to believe that Kobe Bryant should have won, it’s worth noting here that of the five MVPs Michael Jordan won in his career, only ONE, his first, came in a year when his team didn’t win at least 60 regular-season games and the division title. That first one came in the 1988 season when he averaged a league-leading 35 points (while shooting 53 percent from the floor), 5.9 assists and 5.2 rebounds per. Oh yeah, he also averaged 3.2 steals and a career-high 1.6 blocks and was named Defensive Player of the Year. I guess what I’m trying to say is THAT’S what it took for Jordan to win an MVP when his team wasn’t at a championship level (they still won 50 games). Maybe Kobe still has a little way to go.

In fact, in the entire HISTORY of the award, team record has ALWAYS played a role. I always go back to the amazing ’61-62 season when Oscar Robertson averaged a 30.8 point, 11.4 assist, 12.5 rebound triple-double and Wilt Chamberlain averaged 50 points and 25 rebounds per (and dropped 100 on the Knicks) and the MVP went to…Bill Russell. Russ only averaged 18.9 points and 23.6 rebounds a game that year, but his Celtics? They won 60 games and the Eastern Conference. (In a somewhat odd twist, Russell was named MVP that season yet was not named to the All-NBA First Team.)

Some things never change. Congratulations, Dirk. Go out and celebrate. (But, um, not too much.)