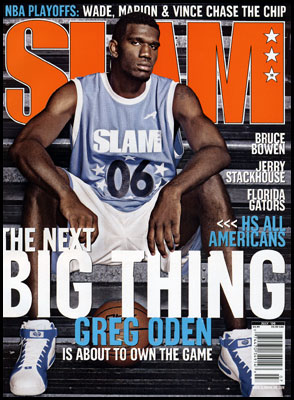 -The point shaving ref with alleged mob ties could come forward as early as next week. From the Associated Press:

The law enforcement official, who spoke to the AP on Friday on condition of anonymity, said the referee was aware of the investigation and had made arrangements to surrender as early as next week to face charges.

The official, who did not identify the referee, is familiar with the investigation but was not authorized to speak publicly about the ongoing investigation.

(I feel like we should be running some kind of contest to determine who the ref is…Or we could just beg Lang to spill the beans.)

-Lil’ Lawrence Frank is getting a new deal. And with the new money, I hope dude can now afford to visit a tanning salon. When I ran into him in Toronto at a Nets-Raptors game a few months back, he looked whiter than white. Downright ghostly. (Thanks to reader Gerard van Nuland for the tip.)

-Elton Brand on the new movie ‘Rescue Dawn’, which he co-produced:

Q: Did it surprise you how long it took to complete the movie?

A: It really did. I knew about the glamour part. How a movie is made; how it is released and then how it goes to DVD. I had to learn everything firsthand. Creating a budget and sticking to it. Finding places to shoot, getting distribution and many other things that were very tedious…. The whole process took two solid years to complete.

-Did the Blazers shut Oden down early because he was sucking so much in the Summer League? According to an NBA scout, that’s exactly what happened.

-Thanks to old copies of Sports Illustrated, Free Darko has unearthed some pretty cool designs “depicting the internal dynamics of divisions in the NBA and ABA alike.”

–Update: Kurt Thomas has been traded from Phoenix to Seattle. The Sonics get two future first-round draft picks (2008, 2010) while Phoenix gets a future conditional second-round draft pick and an $8 million trade exception.