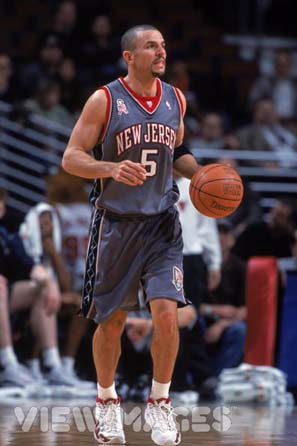 Whenever you interview an NBA player, you always hope he’s going to say something crazy. Like, “I think I can lead the League in scoring and assists,” or “I can’t wait to dunk on Shaq,” or, “Hopefully I can continue to do what I do best. Get the team to the playoffs and have fun doing it.”

That last one doesn’t seem all that crazy unless you consider the context—Jason Kidd in the fall of 2001, talking about the New Jersey Nets. They hadn’t sniffed the postseason since 1998, the John Calipari days. It was September, the month everything changed, and Kidd had just been traded to the Nets in July, two months and an eternity before. When the trade went down, the fact that Stephon Marbury had been traded for Kidd—who was older and thought to be starting on the downside—was what passed for shocking news. I remember someone from SLAM calling me to tell me about the trade, and discussing it (mostly negatively from the Nets point of view) for a long time. As it turned out, we had no idea what shocking was.

We also had no idea about Kidd. We’d all watched him when we could, of course, but in those stone-age days before League Pass the West Coast was hard to keep up with. And Kidd had been out there his whole life—first playing high school and playground ball in Oakland, then at Cal, then in pre-Cubes Dallas and pre-D’Antoni Phoenix. Dude was so Cali he even bleached his hair for a month or so.

So when I talked to him in September, and he started talking playoffs, I wasn’t sure how to take it. I don’t think I actually laughed at him over the phone, but I was thinking it. I’d been to quite a few Nets games over the previous few years, and their flaws were many. Keith Van Horn was timid and inconsistent, Kenyon Martin was injury prone, and Kerry Kittles was all of the above. Byron Scott’s first year as head coach had resulted in a 30 games under .500 season. Subtract Marbury’s obvious passion from that equation and fill it with Kidd’s seemingly cool demeanor—it was hard to believe that things would get THAT much better. Not to mention they had traded their homegrown lottery pick, Seton Hall big man Eddie Griffin, for three lesser-regarded players: Arizona swingman Richard Jefferson, Stanford center Jason Collins, and Pepperdine guard Brandon Armstrong. Playoffs? We’re talking about PLAYOFFS?

Well, we all know what happened. Jefferson and Collins stepped right into big minutes, Martin recovered and became a break-finishing monster, Kittles and Van Horn filled their roles, and Jason Kidd did exactly what he said. The Nets went 52-30, and not only made the playoffs, but advanced all the way to their first-ever NBA Finals, where they were swept by the Los Angeles Lakers. But Kidd had made good on his promise. And I know better than to ever doubt him again.