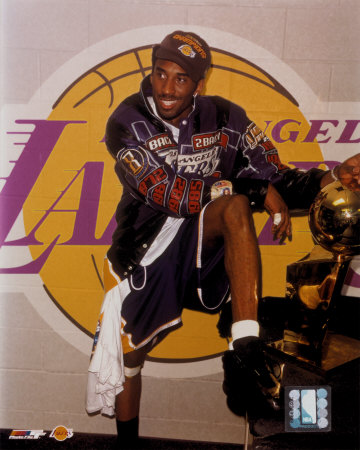 Let’s go back. Way back. (Well, in sports years.) July of 2001. The Lakers of Shaquille O’Neal and Kobe Bryant have just won their second consecutive NBA championship. Kobe, just 22 years old, is in Hasbrouck Heights, New Jersey, to speak at adidas ABCD camp. Six summers before this, he was the camp’s senior MVP. Now he’s got a signature shoe, a Slam Dunk title, a pair of NBA championships and a Secret Service like security detail.

I went out to Jersey to interview him for KICKS, just as I had the previous year. Which was kind of weird in a déjà vu kind of way. Same sneaker company, same event, same circumstances, even the same hotel. Only a lot had changed. There were the burly security guards, for one. There was also the matter of his getting married and buying an enormous house, both events which gave the Los Angeles gossip pages plenty of fodder.

Of course his biggest presence remained on the sports pages. The first championship was a beginning. Maybe even a fluke. This? This was starting to look like a dynasty. Kobe and Shaq were playing nice, Phil Jackson had seamlessly installed the triangle, and the Lakers had rolled over all comers (including the full-strength Spurs, who were missing Tim Duncan in 2001). The Lakers—and Kobe—looked as if they were going to keep winning for a long, long time. In the introduction to the KICKS piece, I wrote the following:

‘You’re in the presence of someone for whom virtually everything has gone right, all according to plan, and you can’t help but be happy for him. And you also wonder what the future will bring—how many times this feeling of deja-vu can persist.

You look at the ring, the Bling Bling from last year. You ask what will be inscribed on this year’s version, and the answer comes on a laugh. “Shaq wants to go with ‘Can You Dig It?,” he says. “I told him I don’t care what it says, as long as we get eight more.”

Can you dig that? Kobe Bryant, at 30, with a double handful of gold. At 30—with years of basketball ahead of him. The scary part is, you can actually see it. In that moment you forget the Sixers, forget the Spurs, forget the Suns. You see the future, paved in purple and gold, and you wonder. Can this really happen?
Stay tuned.’

Well. We did stay tuned, and we all know what happened next. One more championship followed by turmoil. Phil Jackson couldn’t help. Neither could Gary Payton and Karl Malone. And eventually Shaq ended up in Miami, Phil walked away, and Kobe ended up alone. He still isn’t 30 yet, still has years of basketball ahead of him. Phil’s back, so is point guard Derek Fisher—Kobe’s 1996 Draftmate. But you have to wonder—did Kobe ever think it would turn out like this? Here’s what he said during that summer of 2001, when the future was bright, the opportunities boundless.