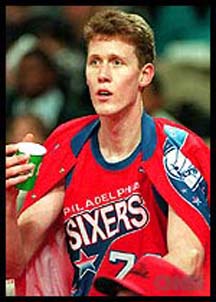 The following interview has never been published.

Before I get to Shawn Bradley’s words, some words on Shawn Bradley. The first SLAM piece on him appeared in the very first issue, a Hype item on he and then-teammate Moses Malone aptly titled “Dinosaur and Junior.” He was also the topic of the first piece I ever had published in SLAM—a 700-or so word diss-fest that was ruthlessly cut down to 200 or so and squeezed into the Hype section of SLAM 6 under a photo of him lying flat on his back.

From there, things only got worse for Shawn. No more words, though, outside of the usual NOYZ cheap shots. Mostly, he just appeared in other people’s photos. The slammed-on of the month. Then, around the same time as the ’98 lockout, we found a photo of him golfing. That ran several times, most noteably as SLAMadamonth and Last Shot. Fortunately, the lockout ended before we got a chance to run it as a poster—or, God forbid, the cover.

Some time in between, most likely early 1996, we found out that Bradley would be available for interviews near our office (at the Empire State Building, in fact). As I was the lowest editor on the totem pole AND Bradley’s biggest detractor, I was the one who got to go. If I remember correctly, the meeting took place in the Beverly Hills Polo Club clothing showroom. Re-reading the following transcript, I don’t think I pulled too many punches—and Bradley, to his credit, rolled with them.

After all, he was used to it.