Do Not Question Steve Nash’s Toughness 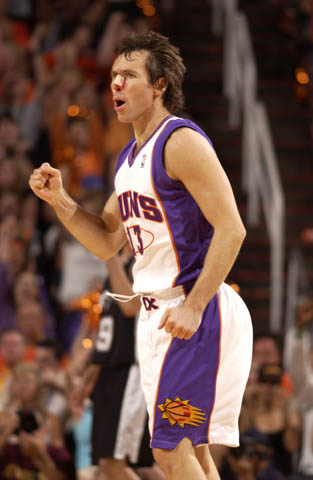 I didn’t take notes through either game today, choosing instead to just watch. However, in the interests of giving a place for y’all to discuss, I figured I’d throw a few thoughts down.

In interests of full disclosure, I didn’t watch the first half. And I wasn’t 100 percent involved for the second half, either. Basically I was impressed that the Cavs were able to hold serve against a tough Nets team. LeBron played like LeBron (well, LeBron with a cold), and Larry Hughes actually decided to show up.

The Nets were just sort of flat. Kidd couldn’t hit the side of a barn (can someone please explain how a guy who can hit a running teammate in stride through two defenders while not even looking can’t make a simple jumpshot?) and Vince Carter went back to his annoying habit of shooting three-pointers (credit the Cavs defense, though, for punishing the Nets inside).

The play of the game came from Sasha Pavlovic, of all people, who chased down Kidd late in the fourth and blocked what Kidd must have assumed to be an open layup. WRONG. Final score, Cleveland 81, Jersey 77.

Much as I wanted to go outside and pedal around (which I still haven’t done), there was no way I was missing this game. I was not disappointed.

The two MVPs, Steve Nash and Tim Duncan, brought their A-games. Robert Horry hit clutch threes. Leandro Barbosa got three speeding tickets. Amare Stoudemire came close to a 20/20 (he finished with 20 and 18), but missed quite a few point-blank shots and was taken to school on the other end by Duncan, who finished with 33 points and 16 rebounds. Shawn Marion, invisible for much of the game (you know, because no one appreciates him) scored 11 of his 16 points in the fourth quarter. Tony Parker took advantage of holes in the Suns perimeter defense to score 32 points.

Nash was clutch for the Suns, finishing with 31 points including a late three that kept Phoenix in it. But he—and the Suns—were felled in the end by a nasty laceration to Nash’s nose (suffered in a collision with Parker that left Parker rattled) that just wouldn’t stop bleeding. Despite the best efforts of the Suns trainers, Nash was unable to go for a good portion of the final minutes, and by the time they got him patched up enough, it was too late. It’s not that he was physically unable to play, but due to the “blood rule” that doesn’t allow a player to play with blood on his uniform or person, he wasn’t allowed to return to the court. It’s a silly rule that may have wound up costing Phoenix the game. (I’d be curious to know how many jerseys he went through, too.)

Statistics say that the winner of Game One goes on to win the series roughly 80 percent of the time. I say, that with this series in particular, you can throw all the statistics out the window.

P.S. For those of you who bought Darius Miles Blazer jerseys, well, you might want to sell now.