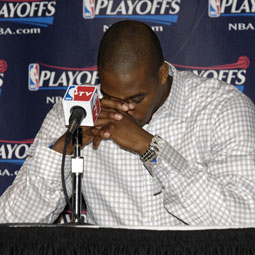 There’s this guy, Jerry Greene, who writes a sports column for the Orlando Sentinel. It’s called “From the Cheap Seats.” Here’s what he wrote today:

“TNT was a bomb Thursday night.

The disdain displayed for Game 3 of the Magic-Pistons playoff series by the national cable network was insulting beyond belief. The seemingly preordained Pistons’ victory barely mattered to TNT, and how it was reached mattered not at all.”

Jerry’s writing primarly for people in Orlando, people who, theoretically, give two sh*ts about this series because they have a dog in the fight. He’s catering to his audience. Good for him.

I don’t have a dog in this fight, but that’s not why I’m treating it with even less respect than TNT. It’s because I know it’s not a fight in the first place. And so do (almost) all of you.

For those of you who don’t, good news: I’ve found some people who clearly take their jobs much, much more seriously than I do.

And here’s another one.

And one more after that.

Oops! Almost forgot this one.

If you want, you can read this, too.