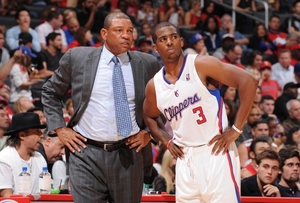 LA Clippers head coach Doc Rivers is one of the most demanding bench bosses in the NBA. His reputation and championship pedigree allow him to get through to everyone, but most critically the superstars.

Rivers took on the enormous challenges and expectations of the coaching the Clippers, and eventually won the test of wills with All-Star point guard Chris Paul.

Accustomed to pounding the ball through most possessions, CP3 was initially reluctant to alter his approach. But Doc Rivers got his headstrong floor general to buy in.

“Players want to find out if you know what you’re talking about when it pertains to them, to the way they do things,” Rivers says. “Every one of them will tell you they want to win, but I don’t think everybody in the league means that. I think they mean it as long as they can keep doing whatever it is they want to do. Winning requires sacrifice.”

“I think Chris realized last year in the playoffs, holding the ball, getting double-teamed, getting down to late shot clocks every time, you’re not going to win that way,” Rivers says. “Movement, quick decisions, pulling it and swinging it and trusting the pass — that makes Chris impossible to guard. And I think he realizes it now.”

When Paul was sidelined with a shoulder injury for 18 games in January and February, Rivers urged him to consider giving up the ball even earlier, while still in the backcourt. Paul smiles thinking about the term Rivers used: the hockey assist. “Sometimes it’s about the pass that leads to the pass,” says Paul, a seven-time All-Star who was averaging 18.8 points and 10.9 assists through March 25. “It’s been fun, passing the ball ahead to Blake (Griffin), letting him push it and make plays. It’s not always about the assist.”

Doc Rivers drives the team hard, but he’s also aware that droning on about the same points can lead to players tuning out a coach (see: Del Negro, Vinny.)

The squad now holds fewer practices and spends less time poring over film than before, conserving their energy for games.

The LA Clippers (54-23) are thriving with this more evenly-distributed offensive attack, as Doc Rivers continues to push Chris Paul, Blake Griffin and company to adapt their games with the postseason looming.