Doc Rivers is going to be extended 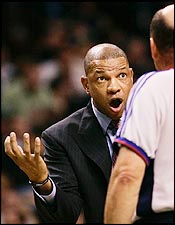 Great work Boston Celtics! Rewarding a coach for getting his young team to play hard and win games, when by winning they are actually trying to repeat the not getting Tim Duncan scenario. Well done, Celtics. It’s not official yet, but it looks like the extension is coming. Isiah is still going to be coaching the Knicks after my time here on this earth is done no matter what happens, so its nice of the Celtics to play along. Philly has Larry Brown waiting in the wings, despite the denials which you can’t trust. They do seem to go through a coach per year, so it’s possible they could stick with Mo Cheeks for the sake of stability. Lawrence Frank was on thin ice for a while, but the Nets organization doesn’t seem to be upset with him in any way. Sam Mitchell is a coach of the year candidate, which in a world of A-Rod walk off grand slams and Peyton Manning Super Bowl MVPs, actually makes perfect sense.

Who is going to be the first coach from the Titanic Division to lose his job? What kind of losing will that take, and how bad is that guy going to feel when the axe swings down? I am convinced that these 5 men will be coaching their current teams until at least 2012.

Great work Doc! You got over on Ainge just like everyone else. I applaud you.