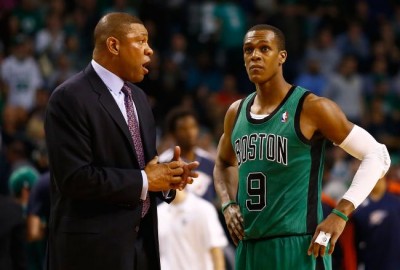 When news of Rajon Rondo’s season-ending right knee injury was delivered to his stunned teammates, all of the pride and joy that resulted from beating their arch nemeses from Miami in double-overtime on Sunday afternoon was immediately drained out of the Boston Celtics’ locker room.

Fans and media immediately declared the Celtics as dead men walking, and many shouted for them to consider trading away the team’s aging stars and start building for the future.

Not so fast, says head coach Doc Rivers. He’s not convinced just yet that the C’s — as presently constructed — are done. Rivers believes the team has enough pride, resolve and skill to rally around their fallen point guard.

“Obviously the Rondo news is pretty tough,” Rivers said. “I knew it before the game; no one else knew it. I just didn’t think it was any time to tell any of our guys that. I told them after the game. Pretty emotional in the locker room.” […] Regarding the reaction of the players after he informed them of Rondo’s injury, Rivers said, “It was good, and then it went down. … I just walked in and told them. I don’t know what else you can do. Guys were celebrating and then it just …”

The Celtics coach still relayed optimism after the game, despite there be no pure point guard on the current roster whom might step in for Rondo. “Well, you can write the obituary. I’m not,” Rivers said. “You can go ahead. But I’m not. We won tonight, and so the way I look at it is: we’re going to stay in there. In my opinion, we’re going nowhere.”

GM Danny Ainge said that even if the Celtics wanted to blow things up, that’s much easier said than done. They have several hard-to-move pieces, and opponents know that they’re desperate.

The Boston Celtics likely won’t be saved by a blockbuster trade — they will have to dig deep within themselves, with Rajon Rondo looking on from the sidelines.