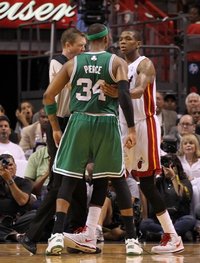 Game 1 of the highly-anticipated Miami Heat/Boston Celtics series was a role reversal of sorts for both teams, with Miami acting like the intimidator for the first time since the two squads began their blood war.

Behind Dwyane Wade’s offensive explosion (38 points), and their physicality, the Heat knocked the Celtics to the ground, and took them out mentally in a very chippy series opener.

From the moment the Miami Heat gathered on a military base for training camp, they’ve had it pounded into them they would need to be tougher, nastier and fiercer to beat the Boston Celtics. Within the walls of the locker room, this has been the constant mantra from Pat Riley and Erik Spoelstra: Boston, Boston, Boston. The Heat know people believed the Celtics had punked them over and over, that they were too timid to stand strong with the bullies.

This was on the Heat’s minds when James Jones came crashing down on Paul Pierce’s(notes) head after a pump fake sent Jones into the air. And this was on Dwyane Wade’s mind when he had far more interest in plowing Pierce on a screen than fighting through it to get to a shooter. The Heat inspired Pierce to lose his cool for two technical fouls, costing him most of the fourth quarter and a chance to come back in the Celtics’ 99-90 Game 1 loss. Inside the losing locker room, in a quiet corner of American Airlines Arena, a livid Celtics coach Doc Rivers [said]: “It wasn’t physical – it was cheap-shot stuff.”

Ultimately, the physical nature of the series will not determine its winner. Talent and execution on both ends of the floor will. Physicality, and so-called cheap shots will just be the icing on top of the proverbial cake.

The Celtics have a couple of days to re-adjust, and to prepare their own surely definitive response for Game 2 on Tuesday night in Miami.