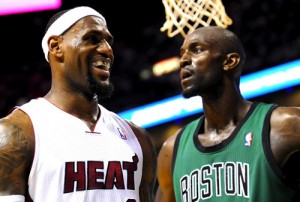 The Miami Heat, the defending NBA champions, have somehow managed to fly under the radar during the offseason. You can largely thank the reloaded Los Angeles Lakers for that.

Doc Rivers isn’t losing focus on what the true enemy of the Boston Celtics is, however. The head coach wants his team focusing all of its energry — and hatred — on the fellas in South Beach.

“Honestly, I don’t care about the Lakers,” Rivers said. “My honest thought as a coach right now … I have my eye squarely on Miami. I come up to my players during the year — they’re in the facility now — I bring up Miami every single day to them. I want them to hate them. I want them to beat them. That’s got to be our focus.”

“I think the Lakers are better,” Rivers continued. “I’m actually not one that thinks they’re way better. The guy they traded, (Andrew) Bynum, we struggled to guard him. Dwight (Howard) is a great player, but we’ve guarded him pretty well. Offensively, the (Steve) Nash part is different. I look at them and wonder how that’s going to work. I hear they’re going to run the Princeton offense, which I want to see the ball move, I want to see Kobe (Bryant) keep moving the ball. But it’ll be interesting. They’re really good.”

Miami has eliminated Boston from the Playoffs the last two seasons, and you’d be hard-pressed to find anyone who would argue that the result would be the different should those teams meet in the postseason again this year.

Hating the Heat won’t be a problem for the Celtics — they’re beyond that at this point, or at least should be. Beating them is an entirely different story.