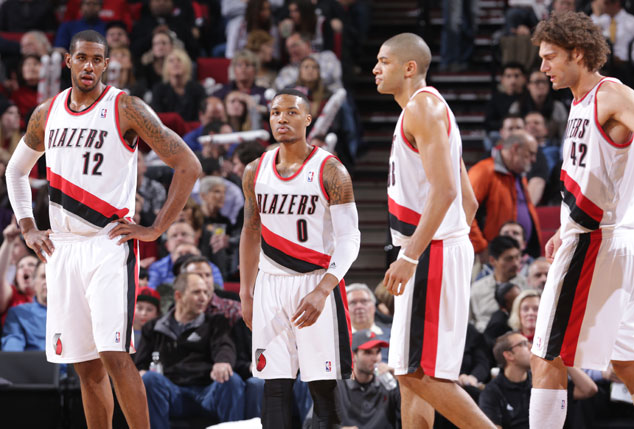 With advanced analytics becoming so vital in the NBA, our guys at numberFire are here to help explain exactly what they mean. Today, we look at the historical importance of defense in the Championship equation. It’s not looking good for the Blazers.—Ed.

Is it true? It definitely seems to be in the NFL with the Seattle Seahawks dismantling the top offense in the Denver Broncos this past Sunday. But what about the NBA?

There’s an ongoing myth about the NBA that many people (who probably don’t watch the game regularly) think is that there is a lack of defense. It’s all just great offensive players dribbling around aimlessly and dunking at will.

This certainly isn’t true. Defenses are creative and complex in today’s NBA, and GMs are hiring defensive-minded coaches more and more frequently after the success of Tom Thibodeau in Boston and Chicago, Frank Vogel in Indiana and Erik Spoelstra in Miami.

The top of the current NBA standings is loaded with good defensive teams, headed by Indiana who is performing at a historic level on the defensive end this season. But there are also a couple teams at the top who have sub-par defenses and make up for it on the offensive end.

How have past NBA Champions been defensively? Is a prolific offense or stout defense more important for a playoff run? Is a bad defense, even if it’s coupled with a great offense, a historical disqualifier for a title? Let’s take a look at the last 25 years and see.

Over the past 25 years, there were a total of six times that a team with a non top-10 defense made the NBA Finals. To get even more specific, there have only been two teams—the ’98 Jazz and ’01 Lakers—that made the Finals despite having a defense in the bottom half of the League. Although the Jazz lost to the Bulls in their series, somehow the ’01 Lakers ramped up their defense in the Finals to take their series 4-1.

I repeat: only two in the past 25 years.

That’s about as definitive as it gets. The data strongly says having a league-average or worse defense, despite how prolific the team might be on the offensive end, makes it very difficult to have sustained success in the Playoffs and ultimately win a Championship.

Seeing the statistics makes it interesting as to why Rockets big man Omer Asik is still with Houston, despite the need of several teams to solidify their defensive core. A shot blocking force in the middle is quite the commodity in today’s NBA, as shown by Roy Hibbert, who anchors the best defense in the NBA in the Indiana Pacers.

So how does all this apply to this year’s season? Are there any teams that have an elite offense but a below-average defense?

Trail Blazers fans should hope that they can channel the 2001 Lakers this postseason, because the historical data is not kind at all to teams who rank in the bottom 50 percent of the League in defensive efficiency. The Blazers do have the NBA’s second-best offense (recently surpassed by the Miami Heat, who we’ll get to in a minute), but again, there is less correlation to playoff success with a high powered offense than a top-10 defense.

Currently the Blazers have a 109.2 OffRtg, so despite their bad 105.4 DefRtg, they still have a positive NetRtg of 3.8. But what happens in the Playoffs when teams have time to scout and prepare for the Blazers offense? If it dips down a little will that be a back-breaker? As seen by the data, a good defense can compensate for a bad offense far more often than the opposite.

The Blazers are shooting 59.7 percent in the restricted area, per NBA.com, which is a little below league average. For comparison, the Heat are first in the NBA in that area, shooting 68.3 percent. They are shooting 40.2 percent from corner threes, which is sixth in the League, and have a pretty good volume of them as well with 306 on the year, a lot of that in part to very good shooters in Wesley Matthews and Nicolas Batum. Matthews’ efficiency is especially off the charts this season, as he’s ninth in the NBA in adjusted field goal percentage.

In the paint (non-restricted area), they’re only shooting 37.7 percent, which is below average as well. Those two areas are generally efficient zones for good offenses, and the top ones usually stack up in those categories at the end of year. Relying on mid-range jumpers at such a high volume (they’ve taken a league-high 1,359 mid-range shots on the season), which the Blazers do and shooting a top-five percentage at it is typically a hard style of play to sustain. They’re efficient now, but when teams have time to scout this in the Playoffs and the mid-range shots aren’t falling, where can they go then?

The Miami Heat are in a similar spot to the Blazers, though a bit less dramatic. As mentioned before, they have the League’s most efficient offense with an OffRtg of 109.3, but they’ve slipped out of the top 10 in defensive efficiency for the first time in a couple years.

They’ve had some defensive limitations in the past, heavily relying on small lineups that can blitz the opposing offense and get steals and transition buckets. Despite all that, they still managed to end up with a top-10 defense every year during the Big Three in Miami.

Last year, they utilized Shane Battier very often as a small-ball power forward, which allowed LeBron James to move back onto the wing and be a part of that incredibly fast moving help defense with Dwyane Wade. This season both Battier and Wade have been in and out of the lineup so frequently that the Heat haven’t been able to put this game plan together effectively this year.

They currently stand at 14th in the league with a DefRtg of 102.7. Whether this is the Heat “coasting” or not is something that has been discussed ad nauseam by NBA writers. Regardless, the defense will likely need to improve if they want to capture their third title in a row. A league average defense just simply won’t cut it in the Playoffs, as we’ve seen year after year.

Defense relies a lot on hustle along with scheme, so it’s likely that the Heat will ramp things in the Playoffs, as their specific style can get pretty exhausting over a season-long schedule. Once Dwyane Wade plays more often with the starting lineup, they’ll be able to get better chemistry defensively. The Heat get a bit of a pass until the Playoffs (sorry, Blazers fans) since we’ve seen this story before.

With an inevitable Pacers and Heat clash in the Eastern Conference Finals, we’re likely going to get a Seahawks/Broncos situation of the league’s best defense against the best offense. Though that will be the most publicized aspect of the series, it will likely come down to how the Heat defense fares against the Pacers offense. The Heat have had a top-10 defense each of the past three championship runs, and will probably need to tighten it up to get within that range if they want to make it past Indiana.

So, does defense win championships in the NBA? The data resoundingly says yes.