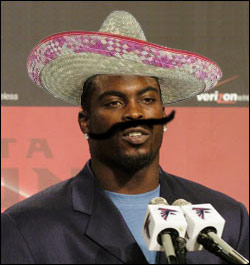 There are plenty of NBA topics out there, for which a thoughtful post full of opinion, humor, and entertainment are deserved. There’s the Yi mystery and a campaign of misinformation to sort through, signings, the latest Starbury bombshell (MJ will be unpleased)… all things that Mutoni will no doubt be all over. But there is more to slamonline than the latest news and rumors and analysis (although it has been in a word – awesome – having someone to keep us in a constant state of timeliness). We are people with personalities, and we have been known to indulge our other interests in writing here.

For example, let’s take a look at one Lang Whitaker. Aside from all of his basketball writing, he has mentioned hundreds of times that he is an Atlanta Falcons fan. On a day such as today, when the face of his franchise – arguably the most electrifying athlete in sports today – is dominating the news because he’s been indicted for all kinds of inhumane crimes against the animal kingdom, I have no choice but to sit back and laugh and enjoy this.

Another thing you know about Lang from his writing, is that he is a dog owner himself. I have never been a pet owner myself other than some fish I accidentally butchered out of the stupidity that comes with being 8 years old, but I for one, am opposed to animal cruelty. I know, a brave political stand to take. This is going to be a true test of Lang’s fandom, and there will be many jokes made at his expense. Does he stand by a player who would look at his beloved Starbury as being too weak to draw blood? I can tell you from personal experience, that there is nothing quite like hating your team’s “franchise player.” I’m not going to get back into the whole Eli Manning fiasco again, because I’m still reveling in my relaxed glow from vacation and I don’t need that kind of pain or stress in my life. I used to defend him, and call me fickle or a bad fan, but now I look forward to his next interception and the next round of escalating “How much do you hate Eli?” I play with my Giants fan friends.

But enough of that. Back to Lang and his beloved hundred million dollar Falcon. How many Qyntel Woods jokes has he made over the years? This is going to be fun.

When I started writing this, I had Yi on my mind, but honestly there’s just not enough information available to say any more about him. Is he pulling a Steve Francis? Is it the fault of his government or his handlers? Is there a larger politically charged issue at play here? Must we have yet another racially charged controversy when people start dragging all of China’s history into this? Let’s just say this, thanks in part to Etan Thomas’s latest column for us, it has not been easy to be a big man lottery pick for the Milwaukee Bucks who was born in another country. We’ve had more discussion about the Bucks over the past few days than during the whole NBA season. I find it interesting how nothing infuriates the masses like the unproven turning pro athlete who dictates where he wants to play. There’s that aforementioned Giants QB, who can’t set foot in San Diego. JD Drew is still booed in Philly. John Elway… well, people forgave him, sort of. It just upsets people when an athlete makes himself bigger than the system, and that system being you are not a free agent until we say so. Maybe all of the NBA players should stage anti-draft rallies. They could burn their bras and everything.

Okay, enough seriousness. One final note on the trial of Ron Mexico. Here is an excerpt from handsome Len Pasquarelli’s espn.com column on the situation.

“Just because you’ve got a lot of links [lying] around doesn’t mean you can call in a chain,” the source said. “But it also doesn’t mean you abandon the notion of seeing if those links might someday become a chain.”

A-HA! It’s The Links fault! And therefore Lang did it to his own franchise QB.