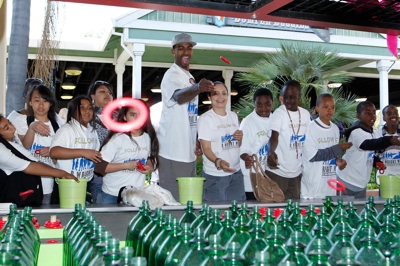 Coming off his best season yet as professional basketball player, Dorell Wright now has his sights on transcending his career-highs on and off the floor. After launching his charity foundation last year, the Los Angeles, CA native has been actively involved in the accretion of his philanthropist efforts. Earlier this year, Wright launched the start of a variety of community outreach initiatives, which included the 1st Annual D-Wright Fun Day.

“The Righteous One,” as Miami Heat star Dwyane Wade calls him, has developed into one of the sport’s leading role models. Drafted by the Miami Heat with the 19th pick in the 2004 NBA Draft, Wright came straight out of high school to the pros. He experienced some growing pains as he began his career on the bench with only some spare minutes every now and then, and

unable to find a stable role– although he did get the highly sought out championship ring as part of the Heat’s 2006 Championship run.  After six seasons in South Beach with limited minutes and roles throughout, Wright signed with the Golden State Warriors on July 13, 2010. He was given the opportunity he had been seeking his whole career and earned a spot in the starting lineup.

In the Bay Area, Wright rose to stardom after showing a significant accession of poise in his game. Particularly, he became one of the most dangerous threats from behind the perimeter. The 6-9 small forward averaged 16.4 points, 5.3 rebounds, 3.0 assists, and 1.5 steals in 38.4 minutes – career-highs in all categories.

He wasted little time in making his imprints on his new home. Just about four weeks into the regular season, Wright sunk a franchise record nine three-pointers in a game, surpassing Jason Richardson’s eight in 2007.

His all-time high season included leading the league in three-pointers made with 194. The record also became the most three-pointers in franchise history for a single season. In fact, he scored more points on his seventh season than on all of his first six combined – becoming the first player in NBA history to do so.

The one time DePaul-commit and South Kent Prep standout would end up finishing third in the NBA Most Improved Player ballot, only trailing Lamarcus Aldridge and Kevin Love.

The offseason was just a busy for Wright as he looked to embellish the outreach and initiatives of his foundation. He has come up with a variety of ways to make an impact on the community over the next few months. His provisions include hosting a select student base of about 25 to 50 kids at each home game this upcoming season. He will be providing box lunch and a t-shirt, and will be taking a photo with each student after the game.

Also launching is the D Wright Way Scholarship Fund. With the intent of motivating inner city kids to seek higher education, the program will offer high school junior and seniors financial assistance to those students who meet requirements. Wright will also be instituting a Holiday Giveaway Toy Program, which will include hosting a Christmas Party for children and parents.

During Thanksgiving, Wright will be commemorating the holiday with turkey donations at youth/runaway centers. A “D Wright Way 4 Kids” program aims to donate 150 desktop computers to children during the beginning of every school term.

It’s fair to say that Wright is about to be one of the West Coast’s biggest community difference makers.

We caught up with D-Wright and discussed this summer’s happenings, including his breakout season, the lockout, the Warriors and his expanding charity foundation, among other things.

SLAM: What motivated you to launch the D Wright Foundation?

Dorell Wright: My number one motivation was, me being from an inner city, it’s tough getting out of sometimes. And so I thought it would be one of the better ideas for me to do once I got to Golden State. For six years, I had the opportunity to see all my teammates in Miami, Dwyane Wade, Alzonzo Mourning and Shaquille O’Neal – they had successful foundations and they really gave back to the community. They played a big part in me wanting to do that because for six years I had a chance to see how they worked their foundations and how much they gave back to the inner city and the community. So that was my main goal coming to Golden State with a new start and ready to give back to the community, and the inner city as well.

DW: You know, me and my mother, we really sat down and brainstormed. I think I had a lot of great ideas. She also had a lot of great ideas. We just put them all together. It was a whole team effort. It wasn’t just myself. That’s how it worked out. A lot of things I do, I’ve seen my teammates do, and I kind of tweaked it a little bit. I’m just learning as I go, and try to do as many things as I could in the community. It’s all for the kids and just doing something to let them know that there’s people out there that care, and it’s not just all about basketball.

SLAM: Where do you see yourself taking this foundation 5 or 10 years from now?

DW: I look at a guy that has been doing it for years – Alonzo Mourning. I’ve been a part of his Alonzo Mourning Weekend since I was a little kid, for the past nine years. Just how he does it and how the community really looks forward to the weekend. Just

SLAM: What exactly was it that you saw from guys like Wade, Alonzo, and Shaq that motivated you to get involved?

DW: Just from them inviting me to different events and seeing how grateful, thankful those kids were. Just how happy they were. You don’t know what they go through on an everyday basis. An hour or however long we’re at an event, just the smile on their faces. They come up to you and say, ‘Oh, this is the best day ever,’ and just touching your hand and ‘Now I’m not gonna wash my hand.’ Just little things like that really touched me, knowing you changed someone’s life or put a smile on someone’s face. I think that’s big.

DW: I got introduced to basketball at a very young age. But basketball was never my number one sport. My dad really pushed me to play baseball. I started playing organized basketball at the age of ten. And then I kind of stayed away from it because I was really into baseball and was trying to become a professional baseball player. And once I got to high school, I kept growing, I was getting better and taller – I always had the skills. But once eleven and twelve grade came along, I started locking down on basketball. I was able to get into the ABCD Camp. I think that was really huge for me to get to play there, you know with the best players in the country. That’s when I really just wanted to be into basketball and get a scholarship into some college, and go to the NBA as well.

SLAM: Lets talk some hoops. Is there anything in particular you did this past summer to enhance your game and take it to the next level?