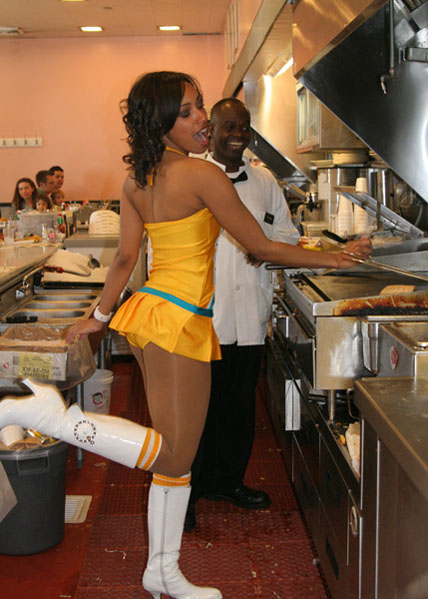 For a few weeks now, I’ve been promising you guys Honeybees. Being a man of my word (if delayed; the SLAM editorial staff can tell you more about that), I’m ready to make good. This past Friday, I was involved with a photo shoot featuring Donna, one of the New Orleans Hornets’ Honeybees.

The first location for the shoot was Camellia Grill, a popular diner in the N.O. Since it was Good Friday, school was out for kids and a lot of adults were off work, so the place was packed and the line stretched all the way onto the sidewalk. Donna met me on the corner of the block–already in her Honeybees’ outfit–and as you can imagine, the stares and comments were crazy. As she told me when she was looking for a parking spot, “Time to stop traffic.” Indeed.

Inside the diner, we (myself and my anonymous photographer) had already told the mostly male staff what was going on, so they were ready for her–and hype as hell. The shoot went off without a hitch, as they even let her behind the counter to work the grill and help bake one of their famous pies (I think letting her “spank the pie” was the highlight of the day). For a good 20 minutes, Donna had the place on smash. The customers were loving her and had children take pictures with her; I think the staff (pictured below) wanted to kidnap her. By the way, I’ve been to Camellia Grill at least five times in my five months here. Highly recommended if you’re in the city.

The grill is located at the beginning of Carrollton Avenue, where the St. Charles streetcar line begins/ends, so my ace photographer got a few shots of her there (although she wasn’t too big on holding onto the pole), too. She caused a scene here, as well, with the streetcar passengers, conductor and people driving by all caused a fuss.

The next and final stop was Tee-Eva’s, on the corner of Magazine Street and Napoleon Avenue. For the record, Tee-Eva (the other beauty below, pictured in the window in the pic down below) has the best snowballs, pralines and pies in the city.

If you’re in the neighborhood, try it for yourself–you can’t miss the colorful storefront. Not to mention, Tee-Eva is one of the nicest ladies you’d ever want to meet. Plus, you might get a good run at the court on that corner, too.

Being that Donna has more going on for her than just dancing at basketball games, I wanted to give you a glimpse into her life, which we talked about after Saturday night’s Hornets-Celtics game (keep reading and you’ll see the money shot at the end).

“I’ve been dancing for about 20 years now,” says the lovely, 24-year-old Tulane student. “My mom sent me to dance school when I was 4. I do all types, but main focus and my major is ballet and modern dance.”

“I’ve always been a dancer, never a cheerleader or anything like that,” she continues. “I don’t have an athletic bone in my body. I always wanted to be a ballerina when I was growing up.”

A native of Algiers on New Orleans’ West Bank, Donna attended McMain High School before moving on to New Orleans Center for the Creative Arts. She went to college in New York for two years before returning home, where she saw a tryout for the Honeybees advertised in the newspaper. Unfortunately, Hurricane Katrina hit and the team (Honeybees included) had to relocate to Oklahoma City.

“It was very different because Oklahoma isn’t as live as New Orleans,” Donna recalls. “But the fans supported us completely, so I felt like I was at home.”

Like everyone else in New Orleans, Donna was affected by Katrina. While her family didn’t lose their home, she did have a difficult experience.

“We were trapped in the Hyatt Regency for five days with electricity or running water,” she says. “Then, we were bused to Dallas, then to Houston for a month.”

Now back in the N.O., with the recent surge in attendance and the team being a potential title contender, the Hornets’ popularity has made even the team’s dancers a hot commodity when they’re out in public.

As for the team, Donna is happy they’re doing so well, but even happier for the city itself.

“I think having the team back here gives the city hope that it’s coming back. The way it’s portrayed in the media is ridiculous,” she remarks, something I can attest to. “I’m like, ‘don’t feel sorry for New Orleans.’ At the same time, a lot of people don’t have much, but the team gives people something to look forward to.”

I can’t speak for all Hornets fans, but I know several (including our E-I-C, who recommended that this happen in the first place when he was in town for the All-Star Game) people look forward to the Honeybees’ performances. But as much as they look like they’re having a good time entertaining the crowd, it’s not all fun and games.

“We practice for anywhere between two and four days a week, depending on the schedule. Practice lasts for about three hours usually,” says Donna. “We do strength and conditioning training for an hour–lift weights for a half-hour, then get on the treadmill for a half-hour–stretch, run through our choreography as an entire team–then again in groups to see who really knows it–then again as a group.”

Although she’s been a Honeybee for three seasons now, Donna says her favorite moment is right before she goes on.

“I’m not nervous, just really excited. I wanna make a good impression, let people know I take it seriously,” she says. “The fans make the game; they keep it crunk.”

While she enjoys dancing for the Honeybees, eventually Donna wants to become a professional dancer (not like that) for a traveling dance troupe.

“Growing up, my dream company was Alvin Ailey, but now I want to dance for Grupo Corpo, which is Brazil’s premier modern dance company,” she says. “I’m going to Africa at the end of next month with the John Allen Project…I get to see what it’s like to be in a professional dance troupe.”

That trip, which will take her to international dance festivals in Zimbabwe and South Africa, will force her to miss the playoffs, but as the only college student invited to perform alongside professional dancers, she’s willing to make the sacrifice.

“I’m really, really busy these days,” she says. “I hardly have any time for myself anymore, but it’s definitely worth it–we’re having a great season.”

Balancing college life, a job–she’s been a licensed massage therapist since 2004 (again, get your mind out of the gutter)–and the Honeybees isn’t easy, but somehow Donna manages to do it and look like–well, check the pic below.

In case you’re ever in town and run into Donna on the street, here’s a couple of inside tips if you try holla at her:

–Her favorite player on the Hornets is David West, “because he’s not afraid to play D and he has so much passion. You can tell basketball is his life; he eats, sleeps and drinks it. Some guys, they’re just out there getting a paycheck.”

–While she wants to be in a professional dance company that tours internationally, she wants to open up her own massage practice for sports rehabilitation (including yoga, pilates and athletic training) when her dancing career is over.

–She likes to travel and has a goal of “filling my passport before it expires in 2017. Every page has to have a stamp.”

–Her favorite show is: “Martin. I know every episode, word for word.”

–Very outgoing and happy, Donna also claims to be “extremely goofy.” An example of that side of her was when “I was in the locker room getting dressed and these big shoe boxes were open on the floor. I stepped in one, fell and slid into a locker. I only had on pants! The other girls still tease me about that to this day.” Imagine that.

–She likes to sleep. “I’m really lazy, I like to lay around (seriously, stop it). One thing I love is to look in the Sunday sales papers. I don’t window shop, but I definitely do that.”

Hope you enjoyed that. I know I enjoyed being there. There may be more Honeybees to come, so check out their site (linked above) and feel free to make recommendations for the future or let me know if you have any specific questions for Donna. Thanks to the Hornets in general (Scott Hall and Brittany Cranston specifically), Honeybees coach/manager Ashley Deaton, the conductor who let us use his streetcar for a quick minute, Tee-Eva, the good people at Camellia Grill and of course, the beautiful Donna (she looks better in person–trust me!) herself.