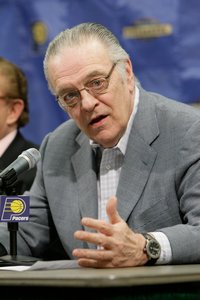 As ESPN execs shout “first!” in the background Donnie Walsh is expected to be announced as the new President of basketball operations in New York this afternoon. The press conference is set for 1pm.

The deal is reportedly for four years and will pay him somewhere in the neighborhood of $20 mil.

So, is this the end of the Isiah Thomas Era in New York? Knicks fans certainly hope so, but you must keep in mind that Walsh is friendly with Zeke (and was the guy who gave him his first coaching gig in Indy), and James Dolan apparently wants to keep him on board.

One group of people who are undoubtedly happy with the Walsh hiring are the long-suffering beat writers who cover the Knicks every day.

The media-friendly Donnie Walsh is expected to re-define the organization’s highly restrictive policy when it comes to dealing with the press. In other words, even if things don’t work out, you probably won’t see an image of his body attached to a turkey on the front pages of the city’s tabloids.