Don’t Ask Carmelo For an Autograph 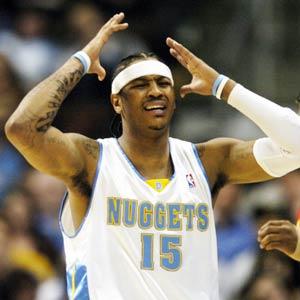 Brandon James Herrera, a 19 year old from Denver, ran into Carmelo Anthony and a buddy at a 7-Eleven last month and asked for an autograph. When ‘Melo refused to scribble his name, Herrera caught feelings and called B-More’s finest a “punk”. Rahchine Craig, Carmelo’s de-facto bodyguard, then got a little rough with the youngster:

“The victim told Carmelo he is a ‘punk’ and began a verbal argument with the suspect,” the report stated.

Craig followed 19-year-old Herrera, of Denver, into the convenience store and “punched, pushed and slammed the victim onto the floor,” the report said.

According to the police report, Craig was cited with simple assault, a misdemeanor. The good news is that Herrera did not require medical attention after the mini-beatdown. When asked about it, Anthony denied the whole thing.

Why didn’t Anthony stop Craig from going after the kid? Was this his way of showing that he’s hardbody and that he’s not to be messed with? With the kind of year he’s had, the last thing he needs right now is more negative PR. That being said, the fact that he still hits up the local 7-Eleven makes ‘Melo even more likable than before.

(Update: Melo’s side of the story)