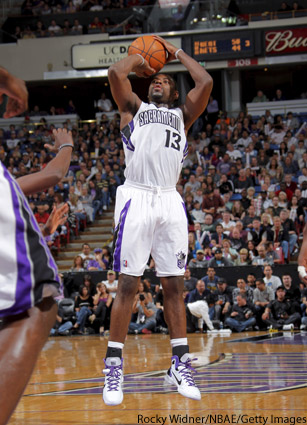 The ’10-11 NBA regular season was jam packed with amazingly unforgettable moments, but if you had to select a single one and call it “best,” you’d struggle to do better than the end of an otherwise meaningless Kings-Grizzlies contest on December 29.

Here’s what transpired: His side up one with just 5.5 ticks remaining in the fourth quarter, Memphis guard OJ Mayo catches a Mike Conley inbounds pass, puts down two awkward dribbles and sinks a clutch fall-away J at the top of the key, lifting his team to a 98-97 lead with 1.5 seconds left on the clock. As members of the Grizz hop up and down in joy and saddened Kings fans drop their heads in all-too-familiar disappointment, DeMarcus Cousins tosses the ball in to Tyreke Evans, who appears to be the only—or at least the first—player on the floor competent enough to realize that his squad has zero timeouts, meaning a quick Hail Mary-esque heave would be its only chance at an unlikely victory. Slightly after his 60-or-so foot lob goes up, the buzzer sounds, the roundball snaps through Memphis’ net, and the Kings’ bench—led by Donte Green, whose celebration, for some odd but hilarious reason, began as soon as the rock left Evans’ hands—storms the court in a fit of excitement. On cue, Reke throws his arms in the air and hops on to the scorer’s table, leading the ecstatic arena in an unexpected but incredibly welcomed celebration.

“We shoot those at practice and at shootarounds,” says Evans, phoning in from Santa Monica, CA, where he spent the summer. “I’m always the one that’s making ’em, and everyone knows me for making those shots. I didn’t think it was going in, but I knew it had a chance.”

Aside from that high point, the rest of the Kings’ season featured little worth remembering. The above W pushed their record up to a still-embarrassing 6-23, and the team finished at 24-58, even worse than the lowly 25-57 mark it accomplished a year earlier. Evans, meanwhile, struggled to maintain the momentum he gained during his Rookie of the Year campaign in ’09-10. After putting up outstanding numbers of 20.1 ppg, 5.3 rpg and 5.8 apg—becoming just the fourth player to average 20-5-5 as a rookie, along with Oscar Robertson, Michael Jordan and LeBron James—his sophomore stats dipped to 17.8, 4.8 and 5.6, while his field goal percentage fell from .458 to .409.

Evans played only 57 games during ’10-11, bothered consistently by plantar fasciitis, a painful inflammation in his left heel. “When he would wake up in the morning, he couldn’t walk on his foot to go to the bathroom,” says Lamont Peterson, a strength and conditioning coach who’s worked with the 6-6, 220-pound guard since he was in junior high. “He had to limp to the bathroom. He has a very high tolerance level, so he can play through almost anything, but it got to the point where it affects him pushing off. It affected him from setting up his shot, affected his follow-through. His game is dominated by his foot play, so if you don’t have your feet, how can you do anything?”

“It was like someone stabbed [my foot] with a knife,” Evans confirms. “It was a tough season for me.”

Post-All-Star Weekend treatment sidelined the Chester, PA, native until late March, when he participated in a handful of tilts but never developed a solid rhythm. Since May, though, he’s returned to the hardwood with force. He’s back at 100 percent, according to both himself and trainer Rob McClanaghan, who’s been working with Reke all summer. In mid-July, Evans traveled to the Philippines with a solid crew of players—including Kobe Bryant, Kevin Durant and Derrick Rose—where he took part in the Ultimate All-Star Weekend, a pair of “friendly” games between NBAers and local Philippine hoopers.

“It was my first time out there,” Evans says. “I had a good time.The fans were great. The whole atmosphere was great. People were waiting outside the gym, outside the arena, trying to get in. It was crazy. Playing with Kobe and the guys who went out there, it was fun.”

But Reke’s actual work has been taking place in the States. Evans has stationed himself in L.A. (the previous couple of summers he migrated back and forth between Cali and his hometown in Pennsylvania), and has been working out daily with both Peterson and McClanaghan, the latter of whom also trains the likes of Rose, Kevin Love and Russell Westbrook.

McClanaghan was anxious to delve into what makes the 22-year-old so special. “Tyreke has unbelievable potential,” he explains. “He changes speeds very well, so he’s very tough to guard. He has unbelievable handle. Having said that, he’s a big guy. He’s a tall point guard and he’s very strong, with long arms. When he’s coming through the lane, he’s not really blowing by you per se, but when he gets you on his hips he’s so strong his guy just bounces off him. So he’s going down the lane and he’s like a pinball machine—guys are bouncing off of him left and right. And he’s even more athletic—he might do that and then dunk on you.”

If you were dared to find a knock in his skill set, it wouldn’t require much of an investigation—Evans shot just 27.3 percent from three during his first two seasons, allowing defenders to sag off and challenge him to make outside shots. Which is especially strange, because during Reke’s younger years, the long ball was his specialty. “His best weapon was his three ball in his senior year [of high school],” says Tony Bergeron, who coached Evans while he was at Aston (PA) American Christian and acting as this magazine’s high school diarist. “The start of his senior year, we sat down in the summer and we talked and we went to work crazy, and he bought into the three. He was about 33.5 points a game as a senior, and you can imagine what defenses they threw at him. His first three games as a senior, he had 50 points all three games.”

Peterson also witnessed all of this first hand. “If anyone’s watched Reke since 8th grade,” he says, “the best part of his game has always been his jumper. In high school, a three-pointer, that was a layup for him.” He believes Evans lost his range during his single year playing NCAA ball, when then-Memphis head coach John Calipari emphasized the dribble-drive. “That’s where he went away from his pull-up,” Peterson continues. “In the League, as you see, he’s unguardable when he attacks the basket. The only weakness in his game is inconsistency from the perimeter. This summer he dedicated himself to just getting a lot of shots up. That’s the thing—when he’s in a rhythm, he’s consistent.”

Regardless of the extent of the long-range improvement, the Kings’ coaching staff, which has relied heavily on Evans’ ball-handling the past two years, has some strategic decisions to make. The franchise selected popular scoring machine Jimmer Fredette with the 10th pick in the 2011 Draft, a move that could unfold a number of ways. For one, Fredette’s long-distance prowess will unquestionably come in handy if he’s positioned as an off-guard, where he’ll have plenty of opportunities to take full advantage of the double- and triple-teams that fall Reke’s way as he navigates toward the rack. “I do get a lot of double teams,” Evans admits with a chuckle. “When I kick it out, he could make that shot.”

On the flip, if the BYU product does log some time at PG, Evans could be moved to the 2, using his speed to take slow(er)-footed off guards and small forwards off the dribble. Of course, there’s a single damning possibility: Fredette is utilized at the point, he nonetheless attempts to shoulder the squad’s scoring load, and the two guards never jell properly. And jell they’ll need to if there’s going to be any success in California’s capital during the ’11-12 season.

The season itself is its own matter. “If we could get the season going—even if it’s just half the season—I just want to play,” Evans says. Signing a deal overseas is a logical option and is being explored by his agent, Arn Tellem, and his older brother, Reggie Evans. (The latter is a big part of “Team Tyreke,” the four family members—brothers Reggie, Julius a.k.a. “Doc,” and Pooh, and cousin Temetrius—who have guided Tyreke since he was a childhood prodigy in Chester. Reke says they’re as involved with his life now as they were when he was in grade school.)

With his body finally behaving, skills steadily sharpening, Sacramento’s leader can’t afford to lose any more of the beginning of his prime away from the court. He’ll have the Spalding in his hands in some context, but youthful groups like the Kings have plenty to lose from this stalemated mess, as they need time—together—to grow accustomed to both one another and the pro game. Evans won’t predict when a resolution will come—he’s told multiple media outlets that team members may meet up for an unofficial training camp, though nothing was in the works as of this writing—but he’ll gladly speak on what his personal status will be when the owners and players finally shake hands once and for all.