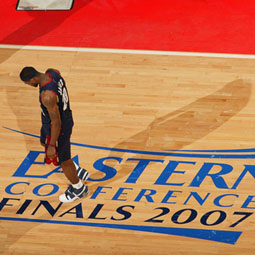 I wasn’t going to do this. I didn’t want to do this. And anyway, I hardly have the time. I’m dumb busy this week, what with my regular job and lawn care responsbilities and constantly looking over my back to make sure the Bluegrass Mafia isn’t sneaking up to merck me with a pick-ax.

Sometimes, though, I just can’t help myself.

I assume Jake’s handling the Cavs-Pistons game notes (update: he’s not), and I’m sure Sam will address this if he hasn’t already (update: he has). In truth, I was content to let everybody else have this one. Then I got to the office today and started reading the internets. Bad idea. Not only did Jimmy Carter backtrack on his fair and balanced critique of the Bush Administration, but all the national basketball writers have apparently lost their minds.

I know many of you won’t agree with me here, but as always, you’re entitled to be wrong.

Two pieces in particular caught me. First is this one, by SLAM favorite Chris Sheridan. We genuinely do like Chris. Good people with a great, dark sense of humor. One of the few mainstream media cats we’re always happy to see at All-Star weekend or at the Finals. So it’s anything but personal when I say Chris got this one dead wrong. Here are the highlights:

It was an instant that called for a split-second decision, and James decided to give it up. And it’s not like he gave it up to Scot Pollard. He gave it to a guy who nailed six 3s in the Cavs’ previous game.

“I go for the winning play,” James said. “If two guys come at you and your teammate is open, then give it up. Simple as that.”

Actually, it’s not that simple, LeBron. Not when the eyes and the weight of the world are on you, and not when people expect otherworldly things out of you even though you’re only 22.

Thanks, Chris. You just threw off my whole f*cking morning.

Five minutes after reading that, I stumbled across this column from an AP writer. I don’t know this person, and although I do have a problem with the AP employing columnists (to me, they’re supposed to be the just-the-facts portion of the media; getting opinions from the AP is like getting nutrional advice from the high school kid at the check-out counter at the grocery store — to which I say, “Shut up, press the buttons on the cash register and put my f*cking cereal in the f*cking bag”) this one isn’t personal either. But here’s what she said:

Give Michael Jordan that same shot, and he doesn’t give the ball up for anybody.

”I go for the winning play,” an unapologetic James said afterward. ”The winning play when two guys come at you and a teammate is open is to give it up. It’s as simple as that.”

If there’s a knock on James, it’s that he’s too good. Too much of a team player. More Magic than Michael.

And thank you, Nancy.

They’re both right, of course, as is every other sh*tbag talking head and talk-radio caller and blogger who will criticize LeBron today. Yes, he could’ve done more last night. Yes, he needs to be more cut-throat and ruthless at the end of games. Yes, it’s no longer a valid excuse that he’s only 22 years old. And yes, the Jordan-esque thing to do on that last play would’ve been to put his head down, do that crazy runaway-train bullrun drive he does and just get to the damn basket, no matter what. Everybody’s right. LeBron didn’t win the game last night, so he has to take the hit for the loss.

He still is only 22 years old. Sorry, but it’s still valid, and I’m not the only one who knows it.

Beyond that — LeBron was, on a night when his shot wasn’t falling against regular triple teams, just one assist away from a triple-double. If Jason Kidd had the exact same game last night, including making that same decision to pass to Donyell on the final possession, our collective reaction would be overwhelmingly positive.

If you want to criticize LeBron for what he did in the first 47:50, I ask only that you remember that the Cavs were in this game, holding a fourth-quarter lead on the road against one of the most dominant and experienced teams of the decade. No, he wasn’t scoring, and yes, he could’ve been more aggressive. But he was also being swarmed by arguably the best defensive team of the era, and as the leader of his team, he had done his primary job: Given his team a chance to win.

And if you want to criticize LeBron for what he did in the last 10 sesconds, I ask that you eat a d*ck.

You can’t have it both ways, people — like my man Chris saying that the idea of a “game-winning assist… just doesn’t seem right,” and this AP writer saying that “if there’s a knock on James,” it’s that he’s “more Magic than Michael,” I’m sorry, but NO. You’re not allowed to go there. You can’t go there and still pretend like you know anything about basketball, because the whole thing with LeBron, the thing that anyone who does know anything about basketball has said all along, is that he is more Magic than Michael, and that’s what makes him special.

This is what Keith Dambrot, LeBron’s high school coach, told me when LeBron was a sophomore, and this is what every NBA scout and coach and GM who watched him told the media over the next few years, and this is what every sportswriter with half a brain regurgitated onto their keyboards when writing about this high school phenom. He’s a remarkable passer, but the blessing and curse is that he’s also probably the most physically gifted passer we’ve ever seen — the “curse” part of that equation being that, because he is such a remarkable athlete, we figure he should always do the Jordan thing in situations like these and take the shot, no matter what.

Except, of course, that Mike passed on that shot a few times, as well. But you knew that.

So, back to that play. LeBron hasn’t been to the line all night, which is partly a result of the fact that he hasn’t been overly aggressive driving to the basket, and partly because when he has gone to the basket, the Pistons’ swarming D has, well, swarmed about as convincingly as it ever has, and partly because he isn’t getting any of the superstar calls he’s used to — or, in a few key cases down the stretch, the regular-dude calls that even the announcers are sort of bemused to see go unwhistled. He gets a one-on-one with Tayshaun Prince, who is undeniably one of the best defenders in the game, and he gets a lane. Rasheed Wallace, who BLOCKED SEVEN SHOTS IN THE GAME, is lingering in the paint.

The sum total of this information: a) LeBron is unlikely to get a clean look at the basket, b) he’s equally unlikely, based on the precedent set throughout the game, to get a call on anything but the most blatant hack, and c) Rasheed’s presence in the paint means Donyell Marshall is wide-the-f*ck-open in the corner.

LeBron, who much to Nancy Armour’s dismay is more Magic than Michael, finds his teammate, a proven three-point shooter, with a perfect pass for a potential game-winning shot.

Donyell missed. If he makes, these columns (this one included) don’t get written, and we’re talking about what a great win that was for the Cavs and what a great play LeBron made.

Unless we’re not. Would you be one of the exceptions, still criticizing LeBron because he didn’t man up and take the shot himself, even if they’d won? That, at least, I could respect. But you can’t have it both ways. The Cavs lost a road playoff game to a better team last night, and as the team leader, LeBron carries some of the guilt for that, because he could’ve done more. There are still a lot of ways this kid can (and will) get better, and you can (and should) hold him up to that higher standard and criticize him for falling short. But that play? You gotta let that one go. Facing a superior team, in a game (and a series) that the Cavs really shouldn’t have a chance of winning, they had a chance last night.

And if, in failing, LeBron James was a little too much Magic and not enough Michael, so be it.