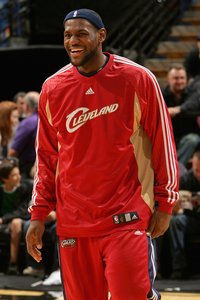 I watched the Cavs/Raptors game yesterday afternoon, and for three grueling quarters, I had trouble staying awake. But in the fourth, LeBron James rewarded everyone who had managed to stick around up to that point.

King led his team back from the dead, scoring 24 fourth quarter points on a series of drives (he’s starting to hit those crazy double-clutch layups after absorbing the contact from hapless defenders with alarming regularity. Be very afraid), pull-up threes from way out, and no-look kickouts to Cleveland’s shooters (I see you, Damon Jones!)

One of the best aspects of the takeover performance was LBJ’s running conversation with a couple of females sitting courtside, and facing the Raptors’ bench. Turns out they were Chris Bosh’s girlfriend and cousin. And though he says they know each other, according to LeBron, they might have cost Toronto what looked like a win going into the fourth q.

“They’re the reason the Raptors lost this game … They kind of ticked me off,” LeBron said in the postgame interview.

Good thing this was just an early January game, otherwise Chris’s girl might have had to face the wrath of the Raptors faithful, much like Spike Lee did in MSG following his disastrous trash-talk session with en fuego Reggie Miller during the 1994 Playoffs.