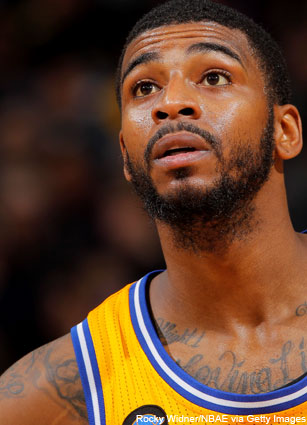 When the Warriors signed former Heat forward Dorell Wright during the offseason, it was barely noticed. But when Warriors GM Larry Riley immediately announced Wright — who had never scored more than 7.9 points per game in six NBA seasons — as a starter, more than a few eyebrows were raised.

Prior to joining the Warriors, Wright was known purely as a defensive specialist capable of hitting the open three-point shots created by Dwyane Wade.

But the Warriors saw the potential for more early on in Wright’s career. When Wright, a Los Angeles native, turned pro out of high school, the Warriors worked him out. “He was very athletic,” recalls Coach Keith Smart, then an assistant with the team. “He could dunk over people.” But the Warriors drafted Andris Biedrins instead, and Wright fell to Miami.

After six seasons in a limited role, the Warriors took a leap of faith that Wright could go to the basket again, and that they could rebuild the off-the-dribble game he flashed as a high-schooler.

Though Wright still has room for improvement, he’s also made the Warriors brass look great by catapulting himself into contention for the NBA’s Most Improved Player award. With a 16.6 per game scoring average headed into last night, he’s on pace to become the only player in NBA history to score more points in his seventh season than in his first six combined. He also leads the NBA in three pointers made, while shooting an efficient .409 from distance. And his leadership — he is the only Warriors regular with experience on winning teams — is apparent as soon as you enter the locker room.

Wright spoke to SLAMonline shortly after the Warriors’ win over Washington Sunday night while his son, Devin Quentin Dwyane Wright, who just turned 3, ran around dribbling a regulation-sized basketball.

SLAM: What was it like for you to come here and become a leader, especially after not having been one of the leaders in Miami?

Dorell Wright: It was pretty easy, because all those years as a young guy I just soaked up so much leadership from Dwyane, GP (Gary Payton) and Zo (Alonzo Mourning). Zo is one guy that really sticks out because he was always a leader, he was always outspoken, and he told the team what it was in different situations. It just made it that much easier playing with those types of guys and understanding what it takes and the right thing to say at a certain time.

SLAM: What did you learn from Pat Riley?

DW: To be hard-nosed, tough, and to go out there every single night and leave it on the court. That’s Pat Riley’s thing: Going out there, playing hard-nosed, being tough and nasty.

SLAM: Was there a moment when you were a rookie that you got what he was all about?

DW: It took me a few weeks to understand what it would take to get some minutes, because they want guys that are going to go out and play hard each night, and lay it on the line.

SLAM: How do you keep the team focused this late in a losing season?

SLAM: It’s tough for a player to adjust his game over the course of the season. How have you been able to do that without hitting too many rough patches?

DW: Just gym work. You get in there at least 15, 20 minutes early, working on little things you want to put in your game. All the things I’m doing now I’ve had in my game, I just had to go find it, and that’s repetition. They say if you continue to do something over and over and over it becomes second nature. That’s all it is.

SLAM: Repetition aside, what is the key to going from being a good shooter to a great shooter?

SLAM: This next question is a hard one, but I have to ask you: You’ve had some bumps in the road in your career, including time on the bench in Miami and an internet incident. How have these things matured you over the last few years?

DW: I had to mature at a young age, 18 years old. Everybody’s past ain’t perfect, you know? You go dig deep on anybody, you can find anything. So that doesn’t bother me. It just makes me stronger. You go out there and prove it to people every single time, so I don’t care about that stuff.

SLAM: Can you talk about your hoop family, and what it means to you? (Wright has a tattoo saying “Hoop Family” on his wrist.)

DW: I got my L.A. crew, my boys from L.A. It’s a big family that continues to try to do great things in the community, and to be good role models. And when we go out there on the floor, we’re going to play hard each and every night.

SLAM: How did you end up being part of that?

DW: I’m from L.A., I’m in the NBA. It’s a group of guys that all grew up together, and if we haven’t grown up together, we watched each other grow. It’s guys like JaVale McGee, Nick Young, Russell (Westbrook). Some of those guys are younger than me, and I watched them grow up and they watched me [here]. BD (Baron Davis), Paul (Pierce), those guys I watched growing up. It’s all a big old family, you know, guys that continue to support each other and support each other’s craft.

SLAM: You always reference cool little pieces of culture. What’s hot right now, what are you listening to, wearing, whatever…?

DW: I wear a lot of skateboard gear, so I like a lot of Stussy, Huf, Supra, things like that. I mix it up, I could put a shirt and tie on, but my look right now is a skater look, with the skinny jeans, the big bulky skater shoes, and the snap back hats that are popular in L.A. now. Crewneck sweatshirts, like the Stussy ones and the Huff ones that are pretty sick. Active socks, I wear every single color, because it’s got to be fresh. You never know who you’re going to see.

SLAM: And what about music?

DW: I listen to everything; I don’t really have certain music… Techno, house music, rap, R&B, Lil Wayne, Jay-Z, all that. I’m trying to be a DJ right now, so you have to keep familiar with everything.

SLAM: So you want to be a dance DJ?

DW: Yeah, go and spin at clubs and parties. That’s my goal right now. I’m trying to be better at that. After our last game I went somewhere and they let me play for like 10 minutes. It was pretty cool.

— David Lee still hasn’t completely recovered from the bite wound and subsequent infection he suffered November 10 against the Knicks. He says the large scar near his left (shooting) elbow still hurts him, sometimes during games.

— Lou’s Book Club: Warriors renaissance man Lou Amundson has given SLAMonline his latest book recommendation: Jon Krakauer’s Where Men Win Glory: The Odyssey of Pat Tillman. “It’s a sad book, but it’s really good,” Amundson says. “It surprised me how much of Tillman’s family had been in the military. He understood what he was getting into, but he really did what he believed in.”