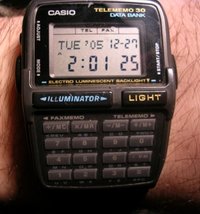 Regular SLAMonline.com readers will recall that Drew Gooden has always been a bit unconventional, such as when he asked us to call him “The Big Drizzle” a few years ago. Or there was the time a few years ago when it was reported on the radio that he’d died in a car crash, when in actuality he was home watching Napoleon Dynamite.

According to the Akron Beacon Journal, Drew’s latest interest is the 1980s. Says the paper:

Gooden is on a big 1980s kick, a current fad in his hometown of Oakland. The Cavs forward recently plunked down $300 on eBay to get a vintage Casio calculator watch.

He’s growing a square patch of hair in the back of his otherwise shaved head, which he calls a “ducktail,” another ’80s look. His left eyebrow also has two lines shaved into it, another forgotten trend from the time of the Reagan Administration.

Gooden, however, was a little upset he had to get into a bidding war for the watch. Apparently he’s run into another trend, as fans of NBC’s The Office are in the market because one is sported by favorite nerdy character Dwight Schrute.

“It was me and another guy and we were bidding back and forth and it kept going up and up,” Gooden said. “I was lucky I got it.”

No, Drew, we were lucky you got it.