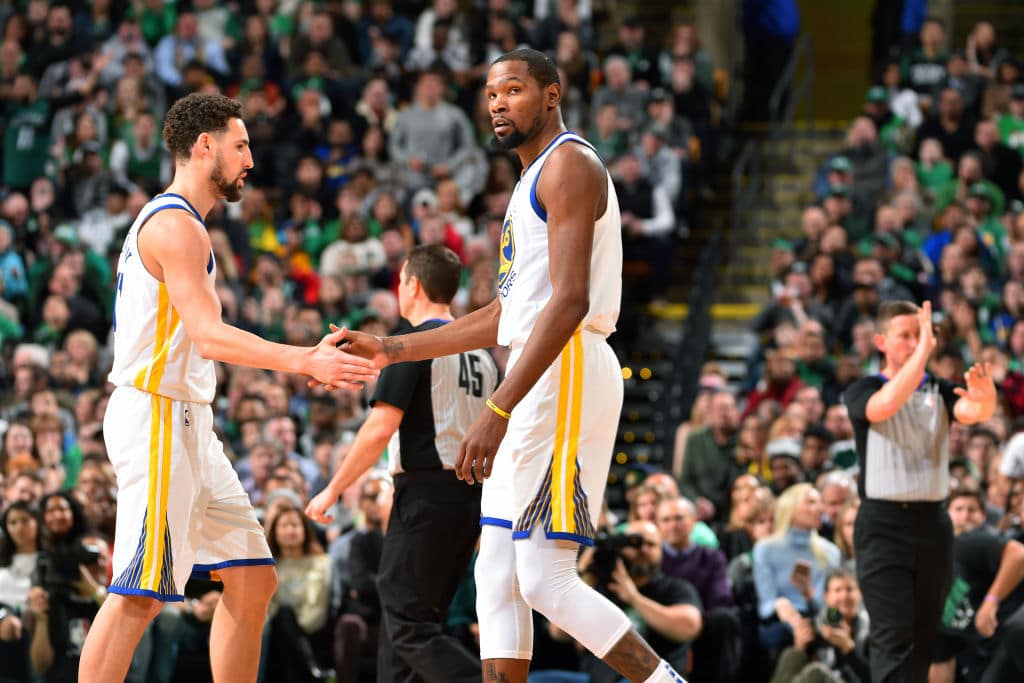 Update #1, 2:19 pm: According to Klay Thompson’s father, Mychal Thompson, there’s ‘no question’ that the Splash Brother will re-sign with the Warriors. Connor Letourneau of the San Francisco Chronicle corroborates Windhorst’s report that the team is expected to offer a full five-year max deal.

Despite Kevin Durant and Klay Thompson both suffering substantial injuries over the course of the NBA Finals, Brian Windhorst of ESPN reports that the Golden State Warriors could, and may intend to, offer both players a full five-year max contract.

Durant suffered a ruptured Achilles in Game 5 of the series while Thompson left Game 6 with what was eventually diagnosed as a torn ACL.

If the Warriors were to extend full, five-year max contracts to both players, it would push their team payroll deep into unprecedented luxury tax territory. Windhorst reports that those additions would increase the team’s overall tab, inclusive of luxury taxes, to over $350 million.

Durant, given his 10 years of service time, is eligible for a max contract starting at 35% of next year’s projected $109 million salary cap. That represents a deal worth around $220 million through 2023-24.

Thompson, having just missed out on an All-NBA nod this year, will have to settle for 30%, or $190 million over the course of the deal, given that he meets neither the 10-year service time threshold or designated veteran eligibility.

While the projected payroll numbers seem astronomical at first glance, the franchise may well be able to offset some or all of the increased luxury payments after moving into the team’s new facility across the bay in San Francisco next season.

Eventually, however, the team will need to look long and hard about how it would fill out a full rotation with so much money tied up in their starting lineup.

If given full max deals, Durant would earn $38 million next season, while Thompson would earn $33 million. That’s over $110 million tied up between those two and guard Stephen Curry.

The club would catch a break when Andre Iguodala’s $17 million deal comes off the books in the summer of 2020 but then they’ll be right back in free agency negotiations with another core rotation piece: Draymond Green.

Expect Warriors general manager to rack his brain over the course of the next two weeks, coming up with ways of making all the dynamic new pieces fit together. His task isn’t enviable but there’s a legitimate chance that this core team could be right back in the mix for a title in the future.