Dwight Howard and Tony Parker, too many accolades? 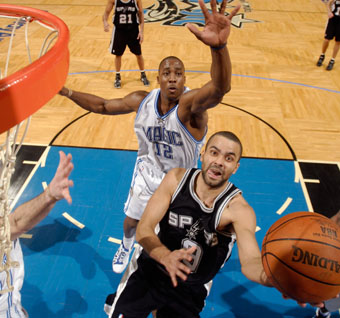 I remember having a heated debate with some colleagues in early 2005. The argument was over who the Orlando Magic should have selected with their No. 1 pick in the 2004 Draft and who would have a better career. At the time, I was sure that Orlando should have picked the known commodity, Emeka Okafor and snatched what I thought would be an All-Star for the next 10 years. Dwight Howard was a shaky pick to me back then. I thought he could either go down as the greatest big man of his generation or be out of the league in eight years, taking trips to Christian revivals with AC Green. Who knew? At that point in the early season, Okafor AND Howard were droppin’ double-doubles as rookies, but my suspicion held. My colleagues (two NBA beat reporters) thought I was insane and told me so.

Well guess what? In the end, they were right. Howard is a Franchise Player while Okafor is destined to be a sometimey All-Star. Still, my estimation of Howard has vacillated approximately 137 times since he bumrushed the L. One month I’m calling him a 7-foot Moses Malone, the next month I’m calling him a supremely-athletic, 7-foot Ruben Patterson. That’s continued this season, even as his squad racks up victories and he comes out of games with 62 points and 48 rebounds.

My ultimate point is this: I don’t think Howard is nearly as great as you think he is.

Last June, Tony Parker hoisted the Finals MVP trophy. This incensed me. It literally made me want to punch Parker in his face. How, on this planet, can a group of supposed experts watch the Spurs’ performance and come to the conclusion that Parker was more important to the Spurs’ success than Tim Duncan?! If that were truly the case, one could conclude that, without Parker, the Spurs would have had a tougher time beating the Cavs than if they were without Duncan, right? Well, there is no measure on the Ridiculous Meter for that conclusion. Plainly, that’s dumb. Then, just last week, ESPN asked today’s best point guard, Steve Nash, to comment on and compare Chris Paul, Deron Williams and Tony Parker as the new generation of point guards; as if, Parker is as skilled of a point guard as the two youngsters. Throughout his career, Parker has benefited from Pops’ system and Duncan’s transcendence. Sure, he scores a lot of points and often does so in dynamic fashion; and, yes, Parker is a better ball player than, say, Kevin Ollie. He is not, however, anywhere near the caliber POINT GUARD that folks believe he is.

In full and revelatory disclosure, I must say that, at the end of the day, I’m a card-carrying member of the Haters Club. This, I will admit. But I feel like much of my hate is justified. It frustrates me that some players are anointed and their virtues are extolled when, on many levels, the basis for this glorification is either straight-up wrong or, at the very least, flawed.

Here’s what we know about Howard: He’s the game’s most explosive and athletic big man; he’s the game’s fiercest rebounder; he’s great at finding space on the floor that will allow his teammates to get him the ball for lobs and dunks; when he gets the ball near the basket, he rarely fumbles the pill and has the insane ability to explode through all the grabbing/grasping/commotion of defenders trying to dislodge the rock and throw him off-balance and throw it down; he’s the only person in the league that has the aforementioned ability, save maybe Amare Stoudemire.

Here’s what we should also ask about Howard: This is now his fourth season in the league; where is even the makings of a go-to move? When’s the last time you saw him execute an ill drop step or turnaround jumper? This dude commits close to four turnovers per game, which is deplorable for someone who touches the ball as little as he does; why is that? People compare him to Young Shaq (which is a fair and accurate comparison); but was Shaq, save for his rookie season, ever this turnover-prone? Have you ever seen Dwight Howard “make the double team pay” on a regular basis? Is he really taking just 13 shots per game? Is that because, unless he gets the ball in the position to yam it, he doesn’t have an inkling of an idea of what to do with the ball? Does Dwight seem to possess the innate tools to have an offense revolve around him, run through him? Why, after seeing how poor foul-shooting hamstrung Shaq late in games throughout his career, has Dwight not spent his full basketball career ensuring that the same Achilles heel doesn’t hamper him?

Here’s what we know about Parker: He’s probably the most unstoppable penetrator in the league; he has a ridiculous variety of shots that he uses to convert around the basket and probably has a more keen knowledge of ball-english/rotation/spin than anyone in the league when it comes to dropping in lay-ups at wild angles off the glass; he shows great discipline and knowledge of his limitations when playing within the Spurs’ system.

Here’s what we also know about Parker: Damon Jones could put up 35 on him; if Steve Nash retired tomorrow to play tambourine for Deathcab For Cutie and the Suns replaced him with Baron Davis or J-Kidd or Chris Paul or Deron Williams, the Suns would operate at anywhere from 90-105% … if Nash was replaced with Tony Parker, they’d be a low-tier playoff squad since Parker is incapable of being truly responsible to run an offense; if the Spurs replaced Parker with any of those aforementioned Top 5 point guards, San Antonio doesn’t just get “better”, they become demonstrably better; Parker doesn’t have three-point-range and by that I mean: if parker shoots a trey, from anywhere other than the baseline, it will likely fall short of the rim; Parker’s role with the Spurs is SO specific — score and try not to make your teammates work too hard for you on defense — that the extreme accolades thrown his way are criminal.

Parker, in many ways, is like his wife. She plays a sexy role on a sexy/popular television show and she’s obviously a pretty woman. But is she B-B-B-B-B-BAD, like everyone claims? Negative. If Kerry Washington, Jessica Biel and Eva Longoria were walking down Park Ave together, you’d see what I’m saying. Parker is good ball player, great piece of the puzzle for his squad. But if I hear him hailed as some transcendent talent again, I’m gonna lose my lunch, specifically after he had the audacity to hoist that Finals MVP trophy last season. He should have handed it right over to Duncan, grabbed the mic and said, “I’m honored and everything, but Timmy is the real MVP” and then went to the locker-room and noshed on a baguette.

Howard’s case is a little more tricky. At times, you can’t deny the numbers. Fact is, if you come out of a game with 33 and 18 (as he did against Charlotte, this month), then … I mean, you dropped 33 and 18. It’s tough to poke holes in those kind of performances without coming across like a Skip Bayless. But, at the root of my problem with Howard is that he also has glaring flaws, the kind that might see him retire ringless if they’re not tended to with great immediacy. Yet people seem to have forgotten that those flaws exist. I know that his three-plus seasons in the NBA have featured constant coaching and personnel changes. I know that this is his first year under the tutelage of a great big man like Patrick Ewing. My ultimate point, as a hater, is that, as a country of cynics, we must not lose sight of the fact that Howard is not Hakeem Olajuwon just because he’s been putting up these gaudy numbers, the same way Shaq was not (in any way) one of the NBA’s 50 Greatest in 1997, when he was bestowed that honor after just four years in the league that included no rings or MVP awards.

With that said, Brandon Roy is the best player in the league.