Dwight Howard Knows Where He Will Sign as a Free Agent 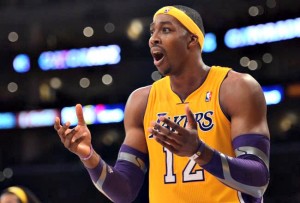 Dwight Howard revealed some important personal details to the LA Times during a lengthy and entertaining interview. He’s honest, goofy and completely intent on keeping everyone guessing about his future plans. In other words, he’s still very much Dwight Howard.

Without a trace of irony or insincerity, the man claims that he’s trying to change the world: “I feel like I was put on this earth to change the world. I wasn’t put on earth just to play basketball. I want to change the world, and this is a great platform to do it.” He talks about becoming an icon, “someone 200 years from now they will remember.”

Howard also makes it known that he cries … a lot: he teared up when Orlando Magic fans asked him to stay, he cried after LeBron James finally won a championship, and he nearly broke down while watching the latest Tom Cruise flick “Jack Reacher”.

Most notably, Dwight Howard says that he knows which team he will sign with once he becomes the most sought-after free agent in the NBA next summer. He’s just not telling.

Howard will be a free agent at the end of this season. I ask him if he knows now where he will be playing next year, and he says, “I know.” I suggest that means the Lakers because he could not know of any other opportunity at this time. But I still make a pitch for the Clippers, figuring he might want to play for the best team in town. He laughs, and when I suggest that some opine that if this season falls apart it will persuade him to leave, he says that’s not the case.

He says the Lakers are all about championships, and “what’s not to like about L.A.?” There is an expectation by some that he cannot coexist with Kobe. “Why can’t we coexist?” he asks. “Because we’re opposites? I thought opposites attract. You know why we can play well together? Kobe knows how hard I work and that I’m all about championships. We’re also entertainers, and for the two hours and 20 minutes that people come to a game they want to be entertained.”

You really should read the whole thing.