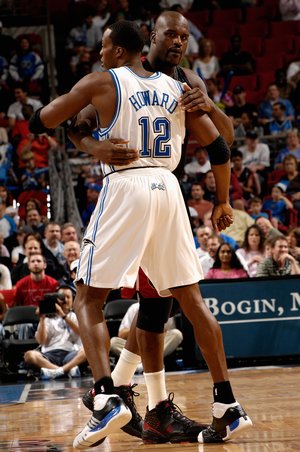 It’s been quite the week for Shaquille O’Neal and his mouth, and the result has been wounded pride and hurt feelings across the NBA landscape. OK, so it’s only two guys who’ve truly felt the Diesel’s wrath, but still.

Yesterday, we talked about Chris Bosh’s new — and unfortunate — nickname; today, we explore the mind of Dwight Howard, who can’t believe some of the things Shaq has said about him. From the Orlando Sentinel:

“I can’t stop Shaq from saying anything. I just wouldn’t expect that coming from him,” Howard said. “But the only thing I would expect from him is that he would try to help me improve my game and that’s it.” Has he? “No,” Howard said.

“Like all the other big guys [do], you know, like Hakeem [Olajuwon], Pat Ewing, Dikembe [Mutombo], Bill Russell, David Robinson … tried to help me improve. … Taking shots at somebody else, I wouldn’t do that.” Howard said he expected some helpful “comments to come from Shaq,” but added that the only advice he received has been basically useless.

If Howard had studied Shaq’s history a little closer, he wouldn’t be surprised by any of this. O’Neal has always been fiercely protective of his legacy and iconography, and would never (ever) admit that a fellow big man had approached his own greatness, let alone dethroned him.

O’Neal and Howard square off in Orlando tonight. It would be a good time for the student to give his reluctant teacher a lesson or two of his own.