Dwyane Wade and LeBron James Too Much for the Indiana Pacers 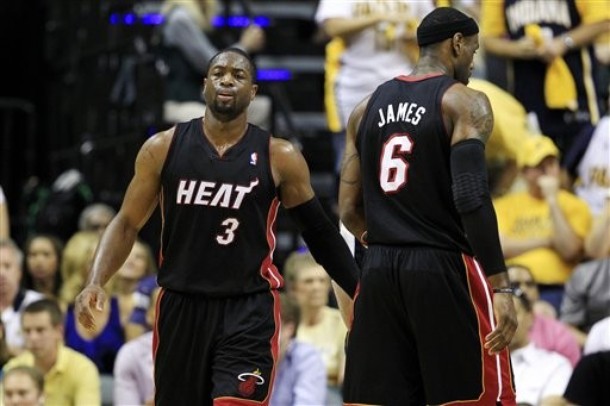 In the end, the greatness of LeBron James and Dwyane Wade prevailed.

Regardless of whatever advantage the Indiana Pacers may have thought they had going into last night — an injured Chris Bosh, a jacked-up home crowd, suspensions to two Heat players — the sheer talent and relentless dominance of Wade and James was simply too much to overcome, and Miami is now on its way back to the Eastern Conference Finals.

Wade scored 41 points, James added 28 and the Heat finished off the once-frisky Indiana Pacers 105-93 in Game 6 Thursday night, advancing to face either Boston or Philadelphia in the next round.

“They’re going to be tough to beat by anybody,” Indiana coach Frank Vogel said. […] Over the course of three dazzling games, James scored 98 points, grabbed 34 rebounds and dished out 24 assists. Wade had 99 points, 22 rebounds and 11 assists. Chris Bosh, sidelined by an abdominal injury, wasn’t missed at all. “In the regular season, we’ve had some good games,” Wade said. “But I don’t know if we’ve ever had three in a row like that in the playoffs, the way we played off each other.” […] One week earlier, Miami was down 2-1 after getting thumped 94-75 in Indianapolis. The fired-up Pacers had another game on their home court and a chance to build a commanding lead. Wade and James simply refused to let it happen. “We understand that when Chris went out, we had to step up,” D-Wade said. “The team looked to us to lead.”

This has to be especially satisfying for Dwyane Wade, who struggled early on in the series against Indy, and came under intense criticism despite knee trouble. Wade turned back into his dominant self and displayed the kind of confidence (on and off the court) that make this Miami Heat such a scary opponent.

Until Chris Bosh returns from his abdominal strain injury, LeBron James and Dwayne Wade will have to continue playing at this insanely high level. Anyone dare to doubt them now?