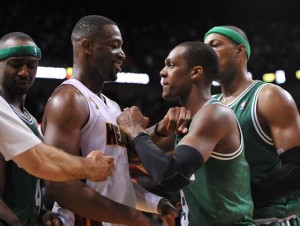 In the closing moments of yet another bitterly-fought game between the Miami Heat and Boston Celtics, a frustrated Rajon Rondo committed a hard foul on Dwyane Wade.

The Heat superstar did not appreciate being grabbed around the head area with two hands, and called out Rondo when talking to reporters. Wade said there’s no room in the game for that type of thing.

Rajon Rondo and Celtics head coach Doc Rivers, meanwhile, shrugged it off as little more than a hard foul in a tense, emotional and chippy game.

Per the Sun-Sentinel and Boston Herald:

“We’re in the NBA,” Wade said after the 120-107 win. “I got my kids watching, so I stopped myself, but it was a punk play. The league will take care of it.” I asked Wade if he said the P-word to Rondo when they were nose to nose. “I just did,” Wade said with a wink. “There’s a lot of cameras here.”

The Boston Celtics and Miami Heat are scheduled to meet again three more times this season, and quite possibly in the Playoffs. In other words, Rajon Rondo and Dwyane Wade will get plenty of chances to lob insults at one another, which is fantastic.

The Heat and Celtics will resume their war on January 27 in Beantown.