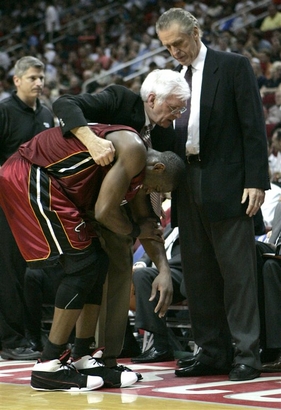 -Wade could miss training camp and perhaps some early-season games because he’s still rehabbing from knee and shoulder surgery.

“My doctors don’t want me to rush,” Wade said. “They make sure I come back when I am ready to come back. We are taking it slowly. Of course, I am rehabbing hard. It’s tough to rehab the whole left side of your body at one time.””I’m kind of glad [about] the pace that I’m going,” Wade said.

“Next year, I want to make sure I’m as healthy as possible, to play the most games that I can play without going in and out of the lineup. I would rather take it slow now, and really hit it toward the end.”

“I don’t know. I hope,” Belinelli said when asked if he can have a similar impact in November. “I think that it’s different in summer league than in the NBA season.”

(Yes, Marco, it is different. Vastly so.)

-The Philly Inquirer thinks that the Sixers need to sign Andre Iguodala to an “a judicious, rather than extravagant,” contract extension. I’m thinking that if Iggy doesn’t get paid for real, he’s gonna be one unhappy camper.

-Do the Heat want Carlos Navarro?

According to a league source, the Heat is preparing to make a trade offer to the Wizards for guard Juan Carlos Navarro, who recently negotiated his way out of a contract with FC Barcelona, one of the top teams in Europe. The Wizards have held Navarro’s NBA rights since selecting him in the second round of the 2002 draft.

-Stephon Marbury is joining the blog revolution. Steph is guest-blogging on the NY Post’s website this week. Is there an athlete out there who doesn’t have a blog?