Flash and Z-Bo put on vintage performances, Kings win for the first time in OKC and more. 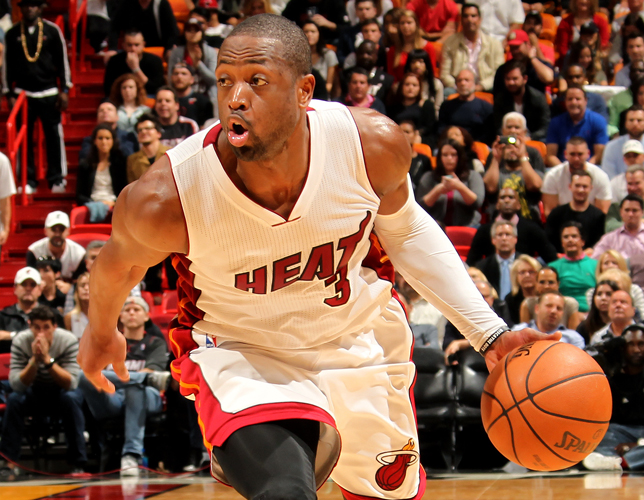 The Cavaliers got them Raptors done real well Monday night, as Cleveland managed a 22-point victory at home. Kyrie Irving led all players with a season-high 25 points to go with his 6 rebounds and 8 assists. JR Smith added 24 points, all of which came from the arc. Kyle Lowry’s 23 points and 10 assists plus a block on LeBron James were cool and all…but simply not enough to control the Cavs.

The Philadelphia 76ers have officially won their fourth game of the season—their third win in six games. Led by recently acquired Ish Smith and his 21-point, 11-board performance, the young Philly squad is building up some confidence. New year, new team?

With a career-high 25 points, Jae Crowder led his Boston Celtics to victory against the Nets in Brooklyn. Boston opened the game by scoring 37 points in the first quarter, taking an early 15-point lead. That lead was never fully overcome.

The Detroit Pistons poured on the points in Orlando to defeat the Magic by 26. Motor City led by as many as 32 during the game, blowing out the Magic in multiple categories including fast break points (20-7) and rebounds (54-30). Kentavious Caldwell-Pope led all scorers with 21 points, and Andre Drummond added a 17-point, 12-rebound double-double.

Yo, Dwyane Wade, tho. Flash is still flashy and making sure people know! With a move like this that took him up in the air for a dunk, and later a buzzer beater that’d send the game to OT…it’s clear D-Wade was feeling it. He finished with 27 points and 8 boards. Chris Bosh was certainly feeling it too, tallying 31 points and 11 boards. The Miami Heat rallied from 18 down, and then finished the Indiana Pacers up in overtime.

The San Antonio Spurs earned their thirtieth win of the season Monday night and their fifth in a row as they blew out the Milwaukee Bucks 123-98. Kawhi Leonard scored 24, and LaMarcus Aldridge added 16 points and 12 rebounds in the winning effort.

With their dub over the Thunder on Monday, the Sacramento Kings earned their first-ever victory in OKC. SLAM’s latest cover subject, DeMarcus Cousins, led all scorers with 33 points and 19 boards in the win. Rajon Rondo added a near triple-double with 13 points, 19 assists and 9 boards. Oklahoma City was without Kevin Durant, and Sacramento had a good time taking advantage of that.

James Harden scored 30 points and dished out 7 assists in the Houston Rockets’ road win over the Utah Jazz. The victory, which came despite a 15-point deficit, ended Houston’s four-game skid. Rodney Hood was the high-scorer for Utah, finishing with 23 points and 7 assists in a losing effort.

Zach Randolph and the Memphis Grizzlies spoiled Damian Lillard’s return to the court on Monday night. The 34-year-old Z-Bo finished with 26 points and 18 boards off the bench, as the Grizz claimed the win in Oregon.

Another day, another victory for the Dubs. The Splash Bros., Stephen Curry and Klay Thompson, scored 30 points each to lead the Golden State Warriors to a home win over the visiting Charlotte Hornets.

Draymond Green threw in his third consecutive triple-double of 13 points, 15 rebounds and 10 assists.