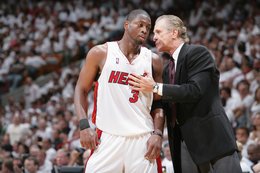 Earlier this week, a crazy rumor surfaced out of Chicago about Dwyane Wade possibly being on the trading block – with the implication being that the Heat and Bulls were discussing a deal involving the former Finals MVP.

It was a ridiculous suggestion then, and it remains that way today, and if you’re still having doubts, hear it from the horse’s mouth.

“The trade rumors circulating are simply rumors,” Wade said in a statement released by his publicist.

“My focus this summer has been to rehab and train for the Olympics and the upcoming season,” said Wade. “Coach Riley and I spoke earlier this week to address the media reports and we are on the same page — rebuilding this team to once again become contenders.”

Sorry, Bulls fans. Looks like your team is going to miss out on a superstar shooting guard for the second consecutive year. Better make good on that top draft pick.