Dwyane Wade is on the comeback trail 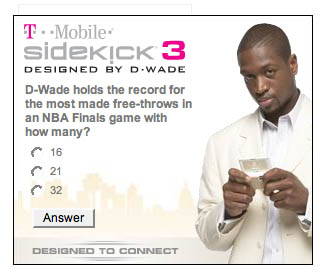 What was once a wheelchair inducing injury, might not even be a season ender. Dwyane Wade claims that he plans to come back this season. He must be motivated by the suddenly mobile and active Shaquille O’Neal, as well as the emergence of Jason Kapono, not to mention the return of Riley. The champs aren’t dead yet. I haven’t seen a player spring back to life this quickly since Steve Francis found out Jamal Crawford was done for the year.

I’ve been holding off on using this photo, but how funny is that trivia question? I assume the answer is 21, but I love that they had the audacity to make 32 an option.

Miami is hanging in there, and the better teams in the East still aren’t all that impressive.