Dwyane Wade: LeBron James is More of a Leader Now 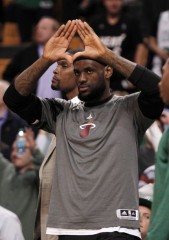 During their first season together, despite all of the success they achieved together, LeBron James and Dwyane Wade never truly figured out who’s team the Miami Heat were. Since he’d been in South Beach longer, and had already won a NBA title, DWade remained the defacto leader of the squad.

After famously flaming out in the NBA Finals, LeBron was forced back to the drawing board. He emerged as a new player, and person.

According to Dwyane Wade, LeBron is now more of a leader for the Miami Heat, and in a somewhat surprising role reversal, it’s Dwyane who’s now taking direction from LeBron (not the other way around.)

From the Associated Press:

Driven by last season’s loss to Dallas in the NBA finals – a series where he made seven field-goal attempts in 68 fourth-quarter minutes – James and the Heat return to the postseason as the No. 2 seed on the Eastern Conference bracket. Their first-round opponent is still not determined. Their ultimate goal was determined long ago. “I have to be who I am,” James said. “Last year was the biggest teacher. The greatest teacher in life is experience. And I had that last year. I’m back to being the person who can take over games. I have no problem taking over a game now.”

“Obviously, last year we kind of got cheated a little bit out of the greatness of LeBron as a vocal leader,” Wade said. “He had so much going on, so much in his mind that he was just trying to show everybody with his play and his toughness. But this year, especially of late, we’ve all been getting the vocal player, the intelligent player that LeBron is. His IQ of the game is second to none. So you listen. Especially me.” […] “I want to win it all, as bad as other guys want to win it – if not more,” James said. “That’s why I play as hard as I do in the regular season, to build my habits, build our team’s habits. I’ve been bothered by last season a lot. It’s constant. I dream about it a lot, winning that trophy and seeing the confetti come down. That’s why I’m here. I’m here because I wanted to compete for a championship year in and year out.”

It’s championship or bust for LeBron James and the Miami Heat, as per usual.

Even though LBJ has repeatedly said that he’s a new man this year, with a much happier outlook on life and the game of basketball, the harsh reality is that anything short of a ring in a couple of months would be considered ruinous.