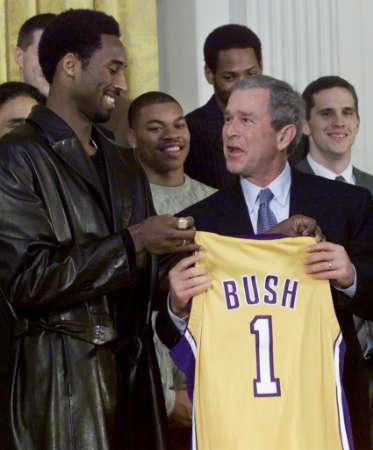 I love it when athletes visit the White House for a photo-op with the President. Shaq told the president he’s doing a good job, a far cry from Rasheed’s legnedary performance where he claimed that he didn’t want to go because he didn’t vote for the guy. Bush weighed in on some NBA topics.

“I know a lot of NBA fans, whether they like the Heat or not, are pulling for Dwyane to get back into action,” Bush said. “We wish you a speedy recovery, Dwyane.”

“They had the stars, everybody knew who they — who the stars are, but it was the capacity to play together, to put the team ahead of themselves, that enabled them to be here at the White House.”

All true. And don’t forget about the free throws. And be careful Mr. President. That is Pat Riley standing behind you. Watch that one. He’s slippery. Here are some accompanying photos.

Classic! But yeah, congrats to the champion Heat for enjoying their day in the sun. Dwyane Wade is the Al Gore of the Heat, sitting back, weighing his options, waiting for the right time to strike…