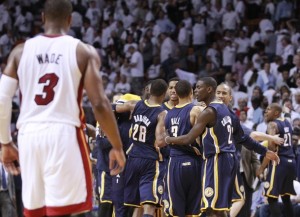 The old NBA Playoffs cliché is that it’s not a series until the home team loses a game.

And if that’s true at all, then the Indiana Pacers/Miami Heat battle is now a series in every sense of the word, and on top of that, there’s a bit of bad blood between the two squads.

The Pacers escaped Miami with a split, evening things up with a gutty win last night. Dwyane Wade did not enjoy watching them celebrate on his court.

Told what Wade said, Pacers guard Paul George said he didn’t see anything wrong with what his team did after the game. “If that’s what he wants to fuel this loss, they should come out just the fact that we came here and took a win from them,” George said. “But we won this like we weren’t surprised. We won it, and went right to the locker room.” […] “I think it’s an excuse,” George said. “We won this game fair and square. We walked off and went to the locker room and now we’re ready to get out of here. … It’s the same way when they won (Game 1). They celebrated, so we just did the same thing.”

Veteran forward David West must have sensed something when he did his best to get his young teammates off the floor following the win, and quickly into their locker room.

Putting aside the delicious irony of a Miami Heat player getting upset about anyone else prematurely celebrating, Dwyane Wade and company have their hands full against the hungry and dangerous Pacers, and they shouldn’t need any additional motivation.