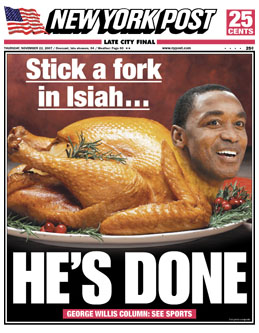 I had a nice and relaxing Thanksgiving break, thank you for asking. Everything was peaceful in my world until sometime between 1 and 4 P.M. yesterday when a certain NFL QB whose brother and father were also QBs, put forth a performance more embarrassing than a Knicks/Heat/Bulls hybrid. I forgot just how deeply I hate that Mann. If it wasn’t so funny in a comedy of absurdity kind of way, I would have been angrier. Let us move on and never speak his name.

Holly wrote her Post Up, recapping what’s happened since we last congregated, and I will go for even more simplicity, ignoring the West so Cub can cover it in his wrap.

Boston: magical season. The Ray Allen shot was totally uncalled for. So now they get to dominate everybody and have the big clutch moments too? If only the Patriots had blown it last night…

LeBron: 31/8/8. This is what many thought he had the potential to be, and yet actually seeing it happen, it’s hard to believe. Some say that for LeBron to connect with fans on a “realer” level whatever that means, he has to let his guard down and allow himself to be seen as “more human.” Eff that. He isn’t one.

Isiah and the Knicks: They found a team more pathetic than them on the court, so they should be – pardon the over the top cliche at this time of the year, but – thankful that the Bulls came to town. So Isiah delayed the inevitable firing for the moment. I’ve already moved on from the Isiah era in my mind, and you know what, I miss it. I miss the days when Isiah was the GM/President/coach of the Knicks. That was a crazy time, because it gave the NYPost ammunition to run front pages (FRONT!) like the fine piece of artistic genius you see to the left of this paragraph. A friend emailed that to me, and needless to say I fell out of my chair from laughing so hard.

Gilbert Arenas: Like millions of others, I love the swag, the Nacho, the Hibachi, all of the self-appointed multiple personalities he has given himself. The more insane (or sane in an insane world?) Gilbert’s ramblings got, the more I liked them. Then he started going a little too far talking about how he’s better than Kobe at this or LeBron and Wade at that, and well, this is what happens when you talk about how great and important you are. Life can take things from you, just because it can. It has become nearly impossible to separate Gilbert the player from Gilbert the personality. Let’s hope both return, lessons learned. Ooooh, how self-righteous.

But really the big story of the East, other than the Celtics and Magic at the top, is that Milwaukee is finally turning things around. They’ve won five in a row, they’re undefeated at home, Yi is forcing his way into the early rookie of the year talk, and their next three games are against Philly, Atlanta, and New York. Atlanta is clearly the greatest threat to them out of that grouping, but the Bucks could easily find themselves riding an 8 game winning streak, and staying right there with Detroit and Cleveland in the central. The Bulls might want to do, uh, something.

Alright, welcome back, although the Mutoni/Holly factory never left. Hope everyone had a good Thanksgiving.