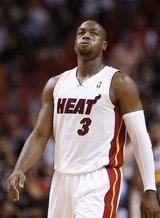 The most surreal game of this young NBA season took place in Miami last night, with the Jazz emerging as the improbable victors following a wild overtime.

While you may have been going crazy watching it on your couch (or inside the arena), according to Eddie House, the Miami Heat were trying to keep themselves from yawning as they blew a 22-point lead.

Some losses make sense. Others, particularly after examining the box score from the crime scene on Tuesday, make for migraines. Depending on the players’ perspectives, this was either a Utah robbery or an overwhelming display of Heat charity. And that’s what made the postgame diagnosis from the Heat almost as inexplicable as the manner in which they snatched defeat from those proverbial jaws of victory.

“For whatever reason, I don’t think we had that sense of urgency,” said Heat guard Eddie House, who missed a 3-pointer with 0.4 seconds that would have won the game in overtime. “I think we got up 20 (points) and might have just gotten bored with that process of how we got up 20.”

Huh? So among the reasons the Heat lost was because they simply got bored of winning. James, who notched the first triple-double by a Heat player since Shaquille O’Neal did it four years ago, pinpointed Miami’s demise as a stretch during the close of the third quarter, when Millsap and Williams combined for 26 of Utah’s 30 points and made 11 of 15 shots in the period.

The Miami Heat — who currently sit behind the Cleveland Cavaliers, of all teams, in the standings — have Boston coming to town this Thursday night.

With the bright lights from national television shining down on the most scrutinized team in the NBA, one can only hope that will be enough to keep their interest for 48 minutes.