Eddie House: ‘Middle Fingers to All the Haters’ 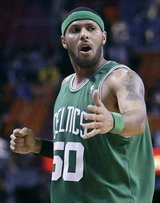 The sad (and motivating) reality for the Miami Heat and their bandwagon is that most of the basketball-watching universe will be rooting for them to fail next season. That’s what great teams must endure — the so-called “haters”.

For newcomer Eddie House, this isn’t a very big problem. He’s got a hilarious answer to anyone standing in the way of his team’s hopes and dreams.

“I think, you know what, honestly, I don’t give a (expletive) about nobody else on the outside,” House said. “It doesn’t matter about anybody out there. I don’t care what their expectations are. We have our expectations and our goals. We are going to achieve them. That’s the bottom line.”

His contention is that the critics have nothing else to discuss and, since “negativity sells,” and “no drama’s no fun,” they’re trying to create some. He calls it “messed up” that the stars are being criticized for taking less money to play together.

“So, at the end of the day, middle fingers to all the haters,” House said.

I just hope the Miami Heat elects to make that statement from Eddie House its official slogan for the upcoming season. It’s certainly catchier than LeBron’s “team John Dillinger.”