A relative unknown as a high schooler on the outskirts of New Orleans, Elfrid Payton’s basketball career took off at a little-known college and is about to reach a new level in the NBA. 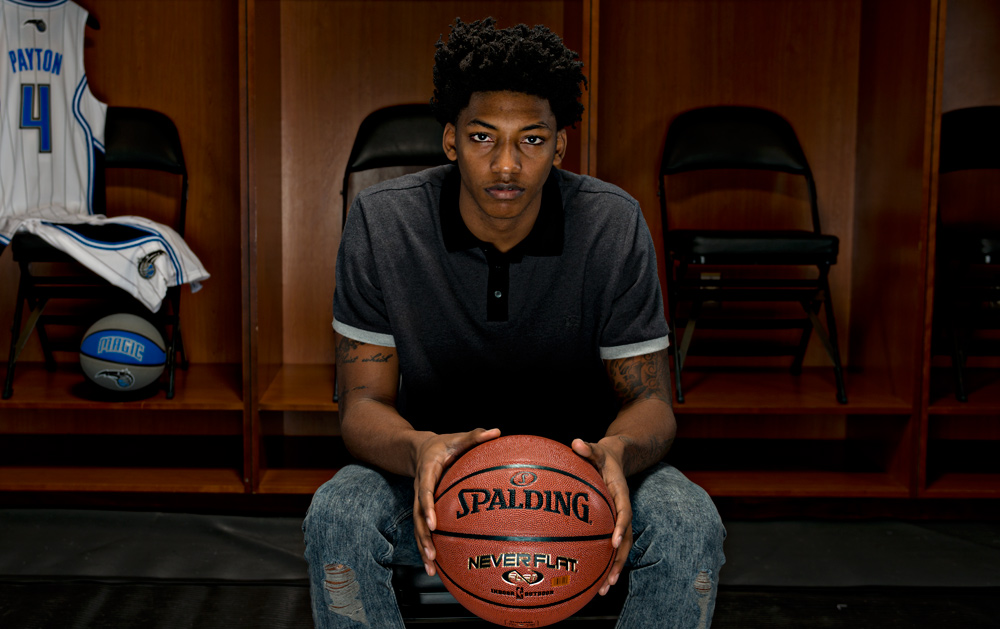 Elfrid Payton can envision his perfect day. It involves a morning spent in bed, an afternoon filled with funny movies while lazing on the couch, and evening of dominating his friends at video games. Today, the last Thursday before the start of his NBA career, is far from perfect.

Early this a.m., Payton, a long and lean point guard who was selected 10th overall in the 2014 NBA Draft by the Philadelphia 76ers before being traded to the Orlando Magic, had practice. After that, he got dressed up and attended a mandatory lunch with the team’s owners. Once the glad-handing wrapped, he ran to an afternoon-long interview with a magazine. From there, he was whisked away to an event with fans at a local car dealership. He didn’t make it home until well into the night.

Despite the grueling day of work, the 20-year-old Payton is not mad. After all, he’s not supposed to be here.

“I do kinda represent those people who are always told that they’ll never make it,” says Payton. “I’m proof that you’ve got to continue to believe in yourself and work until people realize and open their eyes.”

If a lot of NBA players overcome a mountain worth of obstacles to reach the League, Payton had to hurdle Everest to make it. Growing up in Gretna, LA, which is shadowed by nearby New Orleans, the only son of Danielle and Elfrid Sr. did his best to avoid the not uncommon drug- and gang-related traps that ensnared many in his neighborhood. While Payton can’t pinpoint the exact reason why he made it out of Gretna unscathed, he thinks it has to do with his close-knit household and a love for sports.

“My support group kept me away from negativity,” says Payton. He grew up in a house with both of his parents and five sisters. “And sports was another outlet that helped me stay away from things like that.”

“Sports kept him away from a lot of that,” affirms Elfrid Sr., who was a standout player in the Canadian Football League, and is every bit as talkative as his son is quiet. “Me being in his life helped steer him away from that, too.”

To be fair, a lot of Payton’s peers in the NBA were forged through similar upbringings. The difference is, though, that many of them were identified as basketball savants early in life and were then helped by a cadre of coaches and professionals. Payton, on the other hand, was never really ranked by any major scouting service and received collegiate scholarship offers from only Xavier University of Louisiana and the University of Louisiana, Lafayette.

“We started him in school early,” says Sr., who notes that Elfrid should have been a junior in high school when he was a senior, “so he hadn’t developed physically enough for a lot of the schools.”

Nevertheless, what originally appeared as a curse became a blessing. Payton flourished at Louisiana-Lafayette. As a freshman, while adjusting to school and honing his game at the school’s sparse facilities, Payton started 11 games. As a sophomore, he averaged 15.9 ppg, 5.5 apg, 5.6 rpg and was named First-Team All-Sun Belt. That summer, Payton was a surprise selection to USA’s U-19 National Team.

“A lot of people thought I didn’t belong there,” says Payton. “Coming from a small school, they didn’t even think I should be in the tryout. But you know, I went out there and played well, made the team and was able to stand out.”

This past season, as a junior, Payton upped his averages to 19.2 ppg, 5.9 and and 6.0 rpg. His two-way efforts were finally noticed by the nation, as he was named the Defensive Player of the Year. Months later, after stellar workouts for NBA teams, the rangy righty, whose shock of hair was still more well-known than his explosive first step, went 10th in the Draft. “I can’t credit anything but hard work,” says Payton.

In a sense, Payton has already made it. He has an apartment with a view of the Orlando sky, a car that can play Lil Wayne loud enough to crack cement and a spot in the Magic’s starting lineup. Still, after being slept on his entire life, Payton has a deep desire to elevate even higher.

“You stay hungry by wanting to be the best,” says Payton. You stay hungry until everybody knows and can say that you’re the best—and I want to be one of the greatest to ever play.”

Tzvi Twersky is a Contributing Editor at SLAM and the Head of Basketball at Stance Socks. Follow him on Twitter @ttwersky. Portrait by Carlos Amoedo.