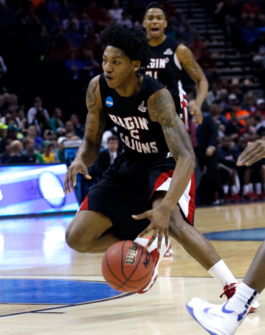 Every year, there is one player in the Draft who causes fans to wonder, ‘Where the hell did that guy come from?’ People who followed college hoops closely were well aware of Elfrid Payton after he exploded at the 2013 USA U19 tryouts, but the 6-4 point guard is still an enigma to some after coming out of Louisiana-Lafayette.

Playing his high school ball at Ehret High School in New Orleans, Payton shined. He was the District 9-5A Player of the Year during his senior campaign and showed off his versatility, but was still a 6-1 guard with a shaky J. He owned an offer from the University of Xavier-New Orleans (a DII powerhouse) and waited until late in his senior season to decide on a school, which ultimately wound up being his lone DI offer: Louisiana-Lafayette.

Three years later, he finds himself on the verge of being selected in the NBA Draft.

While there was a lot of hard work, there was also productivity that followed suit. Elfrid was one of the few players in the country to average 19 points, 6 rebounds and 6 assists per game while shooting over 50 percent from the field. The Ragin’ Cajuns won too. He carried his unit to a Sun Belt Conference tourney and while he fell to Douggy McBuckets and Creighton, he left his mark in the eyes of NBA personnel.

We caught up with Payton in L.A., where he was training with ex-UCLA Bruin and Washington Bullet, Don MacLean. A drill sergeant for details, MacLean put his pupil through drills that showed much more than you were able to see at the collegiate level. Going through a variety of dribble hand-offs and side pick and rolls, which showcased his intriguing skill set. Payton showed a variety of floaters and pull-up jumpers that with his size, will surely translate to the NBA level. Additionally, you were able to see the exceptional bursts of speed that the newly turned 20-year-old has, which have been honed upon with his new teacher.

“Change of speed,” Elfrid immediately shot back when asked what MacLean stressed most. “He’s really big on change of speed and thinks that’s a big thing at the next level.”

As we’ve seen with the best playmakers in the League, MacLean was right. Another aspect of Payton’s game that was showcased throughout the hour and a half session was his ability to shoot the ball. While just a 25 percent three-point shooter last season, he actually shot the ball better from the NBA line. The corners and the top of the key were strong points and Payton himself sees the improvement, but knows that he’s far from a finished product.

“My jumpshot. I just want to get a lot of reps up,” Payton said on what he is looking to improve upon the most. He feels scouts are devaluing the strides that he’s made, stating, “Everybody is entitled to their opinion, so we will see.”

With just over a month and a half until the Draft, Elfrid finds himself firmly supplanted in the first round and with strong workouts, has the potential to crack the lottery. After all, we’re looking at a player who despite finishing three years of college, is younger than some college freshmen. No matter where E finds himself drafted though, he’s carrying over the League.

“By not being on a lot of people’s radars, it just put a bigger chip on my shoulder. I’m glad the way that it happened, and it’s not going to change.”